Any New War in Mideast to Wipe Israel Off World Map: IRGC 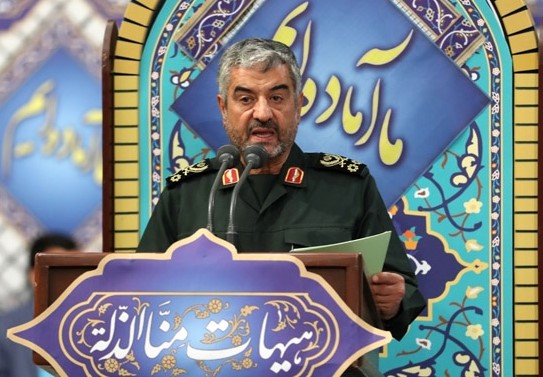 Chief-Commander of the Islamic Revolution Guards Corps (IRGC) Major General Mohammad Ali Jafari says the breakout of any new war in the region will wipe off the Zionist regime from the world map.

“The slightest mistake that the Zionist regime may make will be its last mistake,” Jafari was quoted as saying by Fars New Agency in a Farsi report on Wednesday.

Addressing a meeting attended by the Leader of Iran’s Islamic Revolution Ayatollah Seyyed Ali Khamenei and a group of Basij volunteer forces in Tehran, General Jafari said,“Today, the Islamic Republic’s allies and enemies admit that we enjoy large preemptive capacities.”

Meanwhile, he added, they know it well that the Zionist regime does not amount to any threat to us.”

The top commander said the US isolation from regional political and security developments, the desperate failures of the dependent and regressive regimes of the region including Israel and its Arab allies signal the collapse of the US-led arrogance in the Muslim world.

The IRGC commander also hailed the role of the popular forces (Basij) in recent victories over hegemonic powers. Jafari said such forces are expanding their influence and enriching the Islamic Republic of Iran.

Elsewhere in his address, Jafari said today Basij in the Islamic Republic of Iran is interconnected with the popular mobilization forces in Iraq and Syria and “an undeclared alliance has been established among them.”