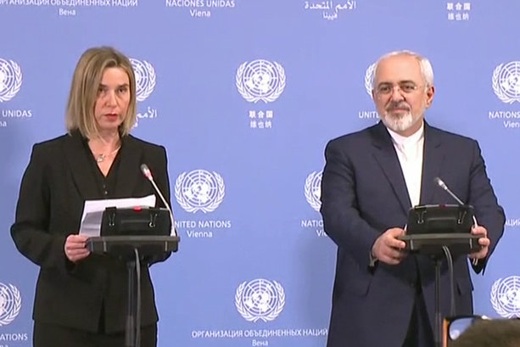 Iranian Foreign Minister Mohammad Javad Zarif and European Union’s Foreign Policy Chief Federica Mogherini on late Saturday announced in a joint statement that the implementation of a nuclear deal finalized by Tehran and world powers back in July 2015 has started.

The joint statement read out by the two top diplomats announced the implementation of the nuclear deal – known as Joint Comprehensive Plan of Action (JCPOA) – which terminates all nuclear-related anti-Iran sanctions.

Here is the full text of the joint statement:

Today, we have reached Implementation Day of the Joint Comprehensive Plan of Action (JCPOA). Ever since Adoption Day, we worked hard and showed mutual commitment and collective will to finally bring the JCPOA to implementation. Today, six months after finalization of the historic agreement, the International Atomic Energy Agency (IAEA) has verified that Iran has implemented its nuclear related commitments under the JCPOA.

As Iran has fulfilled its commitments, today, multilateral and national economic and financial sanctions related to Iran’s nuclear program are lifted in accordance with the JCPOA. The EU and E3+3 countries, consisting of the People’s Republic of China, the Republic of France, the Federal Republic of Germany, the Russian Federation, the United Kingdom of Great Britain and Northern Ireland, and the United States of America, and Iran will also cooperate in the field of peaceful uses of nuclear energy, in the framework of the JCPOA.

The EU has confirmed that the legal framework providing for the lifting of its nuclear-related economic and financial sanctions is effective. The United States today is ceasing the application of its nuclear-related statutory sanctions on Iran, including terminating relevant Executive Orders and licensing of certain activities, as specified in the JCPOA. The EU and the United States have issued relevant guidelines on the details of sanctions which have been lifted thus facilitating international engagement in Iran’s economic development.

As foreseen, we will continue to thoroughly monitor and oversee the full and effective implementation of the JCPOA as exactly agreed on 14 July 2015 through the Joint Commission, consisting of the E3/EU+3 and Iran, coordinated by the EU High Representative for Foreign Affairs and Security Policy. On its side, the IAEA is entrusted with the responsibility for the monitoring and verification of the JCPOA as well as of Iran’s obligations as a Party to Non-Proliferation Treaty and its safeguards agreement and the provisional application of its Additional Protocol.

We would like to use this opportunity to thank the Austrian Government for their hospitality and all those countries that supported the negotiation process and helped to implement some of the commitments under the JCPOA. We also wish to express our appreciation to all those who led these negotiations on behalf of Islamic Republic of Iran and E3/EU+3 since 2003.

All sides remain firmly convinced that this historic deal is both strong and fair, and that it meets the requirements of all; its proper implementation will be a key contribution to improved regional and international peace, stability and security.

This achievement clearly demonstrates that with political will, perseverance, and through multilateral diplomacy, we can solve the most difficult issues and find practical solutions that are effectively implemented. This is an encouraging and strong message that the international community must keep in mind in our efforts to make the world a safer place.