French President Emmanuel Macron has once again met with his Iranian counterpart Hassan Rouhani, shortly after his second meeting with US President Donald Trump in New York.

The unplanned meeting was held as on the sidelines of the annual gathering of the UN General Assembly in New York.

Also present at the meeting was UK Prime Minister Boris Johson, who had plans to meet with Rouhani, but ran into Macron before convening for the trilateral meeting, said Parviz Esmaeili, a deputy chief of staff of the Iranian president on Tuesday.

The talks were held right after Macron’s talks with Trump, Al Jazeera reported.

The meeting was aimed at bringing about a multilateral meeting that would likely have included the US and Iranian presidents as well as Macron and possibly other European leaders.

That would have required that the US and Iran resolve or set aside any preconditions for a meeting.

“I think I agree with Emmanuel. You need to be on the side of the swimming pool and jump at the same time,” Johnson said during a huddle Tuesday with Macron and Rouhani.

But Iran wouldn’t budge on its insistence that the US first ease sanctions and the Americans didn’t meet the Iranian demands. 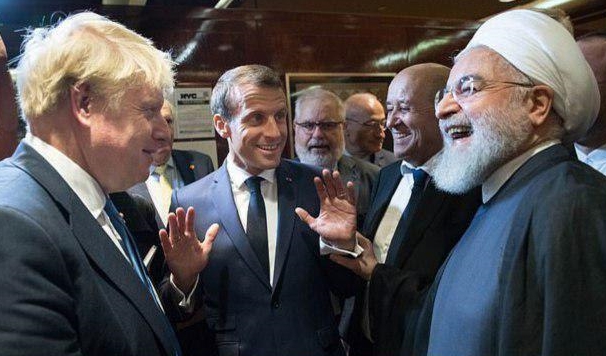 Speaking to reporters Tuesday evening, Macron insisted that his efforts weren’t wasted and that the conditions are now in place “for a quick resumption of dialogue and negotiations” between the US and Iran, the Wall Street Journal reported.

“It’s now for Iran and the US to seize these conditions and to meet together again to re-create some momentum,” he said. “France is ready” to assist.

Despite the talk of progress, differences remain. European nations are still committed to preserving the 2015 nuclear accord even as they are trying to usher in talks about a broader diplomatic arrangement that might supersede it. But Iran says the 2015 deal must first be respected.