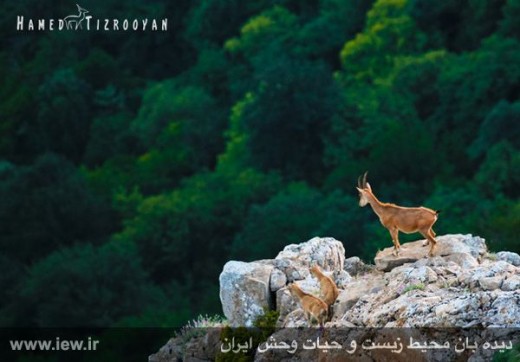 Volunteer environmentalists, who protect Iran’s northern forests, have snapped great photos of animals in their habitat.

The news website of Iran Environment and Wildlife Watch has filed a brief report coupled with a photo gallery of wonderful wildlife in the northern province of Mazandaran on October 11. What appears below is the translation of the report:

Aside from mountaineering, Chakad, a group of young volunteer environmentalists, has been actively involved in helping environmental police ensure wildlife safety in the heights of the provincial capital of Sari since 2009.

The group has made special contribution to the protection of the provincial wildlife during the mating season of red deer – between early September and late October. During this period male deer get involved in frequent territorial fights and make a sound like that of cows to attract female deer.

Because of the secretion of hormones during the mating season, red deer are less alert to threats, something which makes them more vulnerable to hunters. To hunt the animals, poachers lie in ambush and mimic the sound of male deer to lure the prey. As soon as the deer show up, poachers pull the trigger. Young male deer that are often defeated by their old rivals make easy targets for poachers, too. To protect the deer against poachers, the environmental police in the northern forests of Iran put up makeshift tents in crucial spots and step up efforts to shield deer from human threats.

Apart from protecting the forests and mountain regions in Sari, members of this group – Komeil Ghasempour, Hamed Tizrooyan, Kaveh Ateni, Jaber Sabokrooh, and Mohammad Bozorgzadeh – have snapped beautiful and exclusive photos and shot videos of biological diversity and natural behavior of precious species like brown bears, red deer and roebucks.

What is special about the photos taken by this group is that it has used special techniques and invested a lot of time and patience to catch the animals unawares.

Among other photos below, you can see a young brown bear climbing up a tree to eat fruit, big and relentless male red deer during the mating season, a female wild goat and her kids standing on a rock in the heights, rare miniature deer of roebuck and bears which are peacefully asleep in the shade of a tree.

All the photos of this report were taken in 2014, mostly during the mating season of red deer.