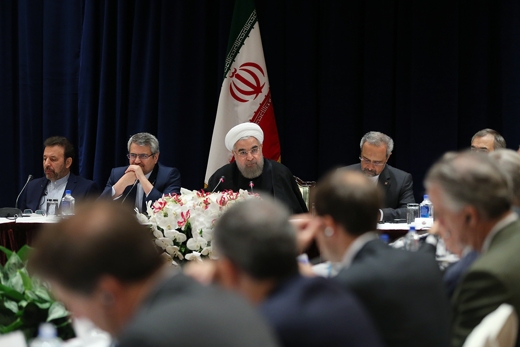 Differences and hostilities between Iran and the US will not definitely be solved overnight, and time, prudence, and constructive measures are required, said President Rouhani.

President Rouhani has said there is still a long way to go before the Islamic Republic and the United States can reduce long-lasting tensions and enmities.

It is difficult to put aside years of “differences and hostilities” between Iran and the US, President Rouhani, who is in New York to attend the UN General Assembly, said Friday. He added, “The Iranian people are unhappy about the policies of the US administration in the region.”

These problems “will not definitely be solved overnight, and we need time, prudence, and constructive measures,” he added.

In response to a question about the “Death to America” slogan chanted by the Iranians in many religious and political gatherings, Rouhani said, “There is no enmity between Iranians and Americans… The slogan symbolizes opposition to US policies, particularly in the Middle East.”

The Iranian president described the implementation of the recent nuclear agreement between Tehran and P5+1, dubbed the Joint Comprehensive Plan of Action (JCPOA), as a significant test for the United States.

“The full implementation of the nuclear agreement is a big test of confidence… The [anti-Iran] sanctions should be fully lifted in order for Iranians to feel that negotiation is effective,” Rouhani said.

The president further said that the nuclear agreement should be implemented despite oppositions. “Disagreements and agreements [with the JCPOA] in Iran and the US are natural. In Iran, a vast majority of people are in favor of the agreement and a minority against it. It is important to execute JCPOA by the end of the year, Rouhani said.

Rouhani expressed sadness over Thursday’s tragedy in Mina, outside the holy city of Mecca in Saudi Arabia, calling on Saudi authorities to better manage the hajj rituals.

The Saudi government is expected to “reconsider the Hajj management process and be committed to providing security and safety for all pilgrims.”