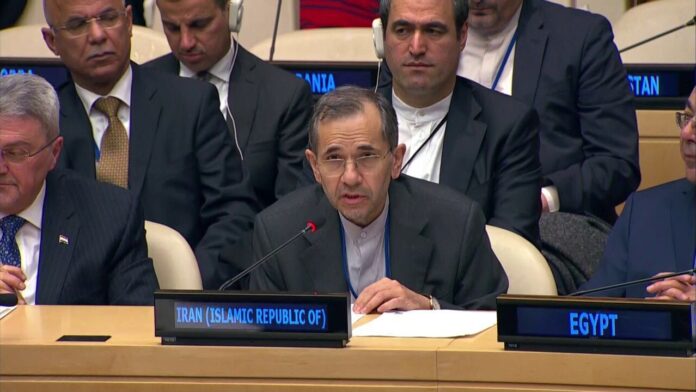 Iran’s ambassador to the UN says the lifting of US sanctions will serve the interests of the whole world.

Majid Takht Ravanchi noted Washington’s unilateral sanctions will further contribute to the spread of the coronavirus.

“In order to effectively fight the coronavirus, the lifting of the United States’ illegal sanctions is a must and is in the interest of the whole world,” he said in a letter to the chairperson of the UN General Assembly.

In his letter, the Iranian envoy touched upon requests for the lifting of sanctions made the UN secretary general, director general of the World Health Organization, the UN high commissioner for human rights, world leaders, NGOs and the civil society.

“Instead of agreeing to those requests, the US has not only refused to lift its illegal and unilateral sanctions, but has, in some cases, intensified its sanctions,” he added.

He said US sanctions will not only be detrimental to citizens of countries, but will deal a blow to the global fight against COVID-19 and harm the health of all people on the planet earth.
He further called for a concerted global effort to contain the disease.

“Under the current tough times when the flames of the coronavirus have engulfed all regions and countries, international unity and cooperation is a must because all countries are on the same front when it comes to fighting this widespread disease,” he said.

Two weeks ago in a joint letter to the UN Secretary General António Guterres also signed by seven permanent UN members, the Iranian ambassador had underlined the need for the US to remove its sanctions in order to help sanctioned countries boost their capability in the fight against the coronavirus.

Ten more countries signed the letter over the past few days.