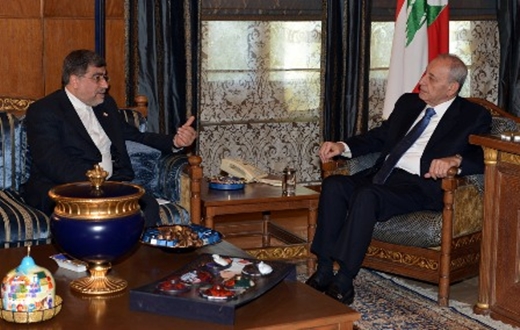 At a meeting with the Iranian culture minister, the Lebanese parliament speaker said ISIL has been created to marginalize the question of Palestine.

In a meeting with Iranian Minister of Culture and Islamic Guidance Ali Jannati in Beirut, the Lebanese president said the wave of terrorism [sweeping the region] aims to cover up the activities of the Zionist regime, which is the common enemy of all Muslims.

He further warned of the plot to disintegrate Syria and said it is regrettable that Islamic and Arab countries were no longer viewing the Palestinian issue as their top priority.

Berri said that Iran was still concentrating on the issue of Palestine with a special zeal and tried to safeguard the unity within the Islamic world and protect the territorial integrity of all regional countries.

He expressed hope a nuclear agreement between Iran and world powers would be signed soon so that all regional countries, including Lebanon, would benefit from its outcome.

The Iranian culture chief underlined Tehran’s support for convergence and dialogue among all Lebanese political groups to enhance security, stability and peace in the country.

Jannati also met with Lebanese Prime Minister Temam Selam. At the meeting, among other things, Iran’s nuclear case came up for discussion.