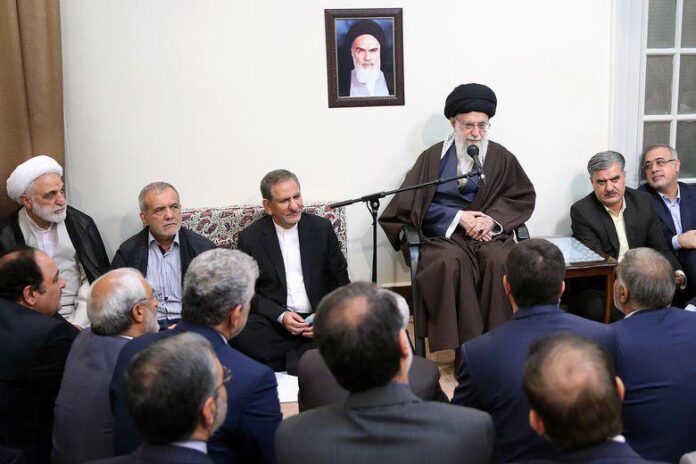 Leader of Iran’s Islamic Revolution Ayatollah Seyyed Ali Khamenei says the officials must respect the security and privacy of the users of Iranian messaging apps.

In a Monday meeting with a group of high-ranking officials in Tehran, Ayatollah Khamenei noted that violating the security and privacy of the people is “Haram” and warned officials against doing so.

The Leader also expressed his satisfaction with the campaign for creating domestic social media and messengers, which has turned into a national request.

Those in charge in the government and the Judiciary organisations must do their best to protect people’s privacy and their secrets, he added.

Telegram, the most popular messaging app in Iran, has grabbed the headlines in the Islamic Republic and the government of Hassan Rouhani is under pressure to block the “threatening” messenger.

In late March, the conservative lawmaker Alaeddin Boroujerdi said in an interview that “the decision has been made and I believe by the end of this [Iranian] month [April 20], Telegram will be replaced by a domestic messenger.”

He cited “national security” concerns as the reason why the messaging service will no longer be accessible, saying it was a response to what he called Telegram’s “destructive” role in the violent protests in late December.

The lawmaker was referring to price protest that began in the eastern city of Mashhad and spread to several cities across the country. The demonstrations later turned political and even violent in some cities, leaving several dead and injured.

The heated debate about the fate of Telegram prompted President Rouhani, whose government is under great pressure to block the messaging app, to make an intervention.

Remarks by the moderate president showed Iranian officials hold conflicting views about the filtering of Telegram. But it seems safe to conclude that a consensus has emerged among government officials on diminishing the influence of foreigners on the country’s cyberspace.

At the moment several domestic apps like Soroush, Wispi, and iGap are named as the replacements of Telegram.