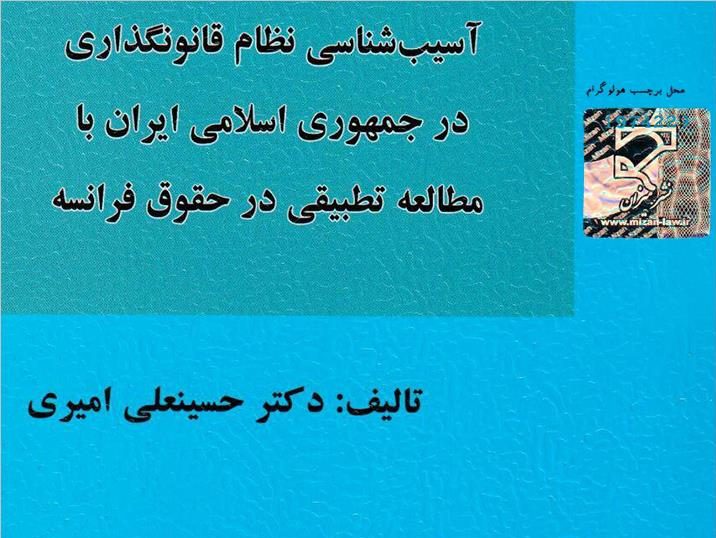 A new book has been published by an Iranian lawmaker on the pathology of the country’s legislation system.

The book named “Pathology of the Legislation System of the Islamic Republic of Iran: A Comparative Study of Rights in France” is the latest research piece by Dr Hossein-Ali Amiri, a senior member of Iran’s Parliament.

According to a Farsi report by ICANA, in his new book, Amiri has studied the main problems of the legislation system of the Islamic Republic of Iran.

Comparing Iran’s legislation system with that of France, Amiri provides his readers with some proposed mechanisms to remove the current problems in the Iranian system.

The book whose latest edition has been published by Mizan Legal Foundation has two main sections. In the first section, the author studies the legislation process in Islam, Iran and France from a historical point of view. And in the second section, he deals with a number of main subjects like easy access to the laws and law revision methods.

Amiri who has a PhD in Public Law has been serving at different judicial, legislative and executive posts over the past three decades. He previously served as a deputy Interior Minister, a member of the Guardian Council and a deputy of Judiciary branch.

“The current disputes over the nature of law and legislation phenomenon are very serious. On the one hand, there is a camp maintaining that having a law is the only way to save our country and free ourselves from the yoke of despotism. On the other hand, there is another camp saying that legislation is only for God. They cast doubt on the credibility of man-made laws without distinguishing between the phenomenon of positive law and legislation on the one hand and the source of law on the other,” he wrote in his introduction to the book.

He cited the main problems of Iran’s legislation system as enacting large number of laws, repeatedly reforming the current laws, and lacking appropriate guarantees to enforce the passed laws among many others.

In the final chapter of the book, Dr Amiri has set forth some proposals to remove the above-mentioned problems including developing a general framework for legislation, addressing the plans and bills and creating a mechanism for making sure that the approved bills are in line with the original documents.

The one volume has been published in 296 pages in one volume, royal octavo in size.