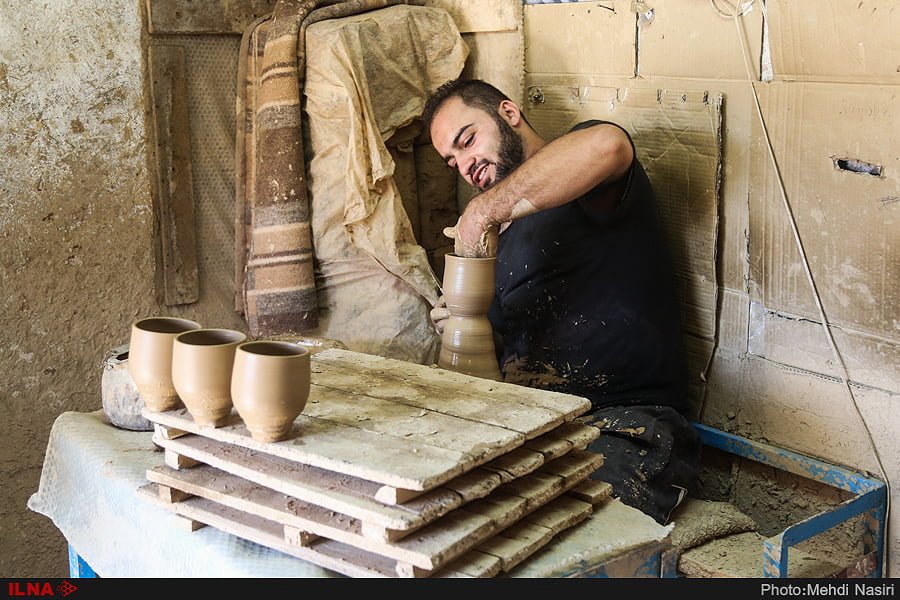 The city of Lalejin in Iran’s Hamadan province is globally known for its pottery, and this has helped the World Craft City to decrease its unemployment rate to almost zero.

There is no unemployed person in the city and many people from other cities come to work in Lalejin, which is widely known for its high standards of craftsmanship.

In Lalejin, in every alley you can find a pottery workshop. Here, clay is very important, and at least some intact and broken pottery can be found in every home.

There are more than 1,000 pottery workshops in the small city, and that has created a huge number of job opportunities for the residents.

Every workshop is known for a particular product.  In these workshops, men make the pottery and cook them in the furnace. Some of them draw paintings on the products or let women at home paint on the pottery. That’s because the workshops’ atmosphere is female-unfriendly, and making pottery needs masculine hands. Women, who work in pottery workshops in other cities, usually make decorative dishes.

Officials from the city of Lalejin also tell the journalists that the city has zero unemployment rates, as all people have a job and even some people come from other cities to work in this city. One makes a pottery, another places it in the furnace, and the other one paints it.

Some others are busy at 12 exporting units to send these potteries abroad. There are many other people who work in 264 workshops in the industrial town.

None of these people want to see Chinese pottery in their city. For this reason, Mohammad Reza Qaderi, the Director of the Handicrafts Department of Lalejin, says “we do not have a Chinese pottery. This word is totally wrong. They are Chinese products, but we do not give them to the customers. It is no longer cost-effective for the customers to buy Chinese products when the Iranian products come in better quality and price.”

He also added that the quality of Lalejin’s pottery is much better now after it became famous around the world.

“Each year, world-class handicrafts referees come to Lalejin to see whether the Lalejin pottery is still good enough in terms of colour and quality.”

As Qaderi and the municipality of Laljin emphasise, the UNESCO evaluators annually write a positive report on Lalejin and are satisfied with the fact that all the people have a job there.

Laljin has been selected as the best exporting city for the past 5 years and its products have been exported to Iraq and Afghanistan, among other countries. Spaniards, Germans and Dutch are the main customers of these potteries.