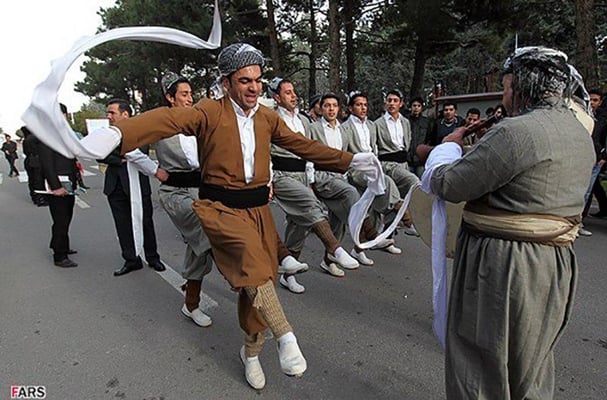 Dances are usually a celebration of life and its happy events, but apparently a version of Kurdish dance called Halparke has its roots in military affairs.

Halparke is an ancient round dance where people hold hands and move their feet and shoulders rhythmically and in unison.

Speaking to ISNA, Qaderi said his Kurdish dance has been performed not only in celebration of the new year and other happy occasions, but also during wartime, to demonstrate that Kurds are not afraid of the enemy and are united to defend their homeland.

In this dance, dancers take two steps back and then take four steps forward, while travelling in a circle, conveying a message that if the enemy attacks and pushes them back, they will fight back and won’t budge even an inch, he said.

Qaderi said the dancers hit their right foot roughly to the ground, which means no one can annihilate Kurds and they will remain forever.

In every dance one dancer comes to the head of the circle, who is called Serchopi, holding a colourful cloth in his right hand.

Qaderi said Serchopi plays the role of the military commander of the group, and the cloth he carries is the symbol of a weapon.

In the ancient times, Kurds used to perform dance in royal palaces in celebration of military victories. But it was forbidden to take arms to the palaces. So the Kurds used clothes for performing dance inside palaces.

Qaderi said he has found a Kurdish dance group, which he said aims to preserve their culture and traditions.

Kurdish dance is common in Kurdish-populated regions of Iran, particularly in Ilam, Kurdistan and Kermanshah provinces.