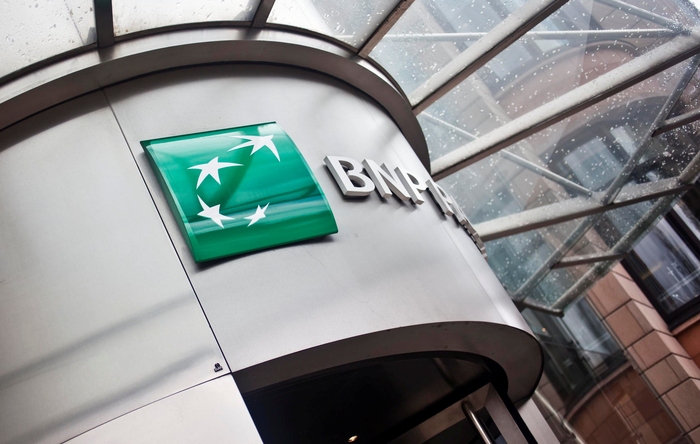 On Friday May 13, US Secretary of State John Kerry met with heads of 10 European banks. According to a report by Javan newspaper, a source has commented that while publically, these banks did not respond positively to re-engaging with the Iranian financial system, certain European banks have unofficially indicated their willingness to resume ties, on the condition that they are compensated for penalties already paid to the US for their relations with Iran. The Javan report is translated by IFP. 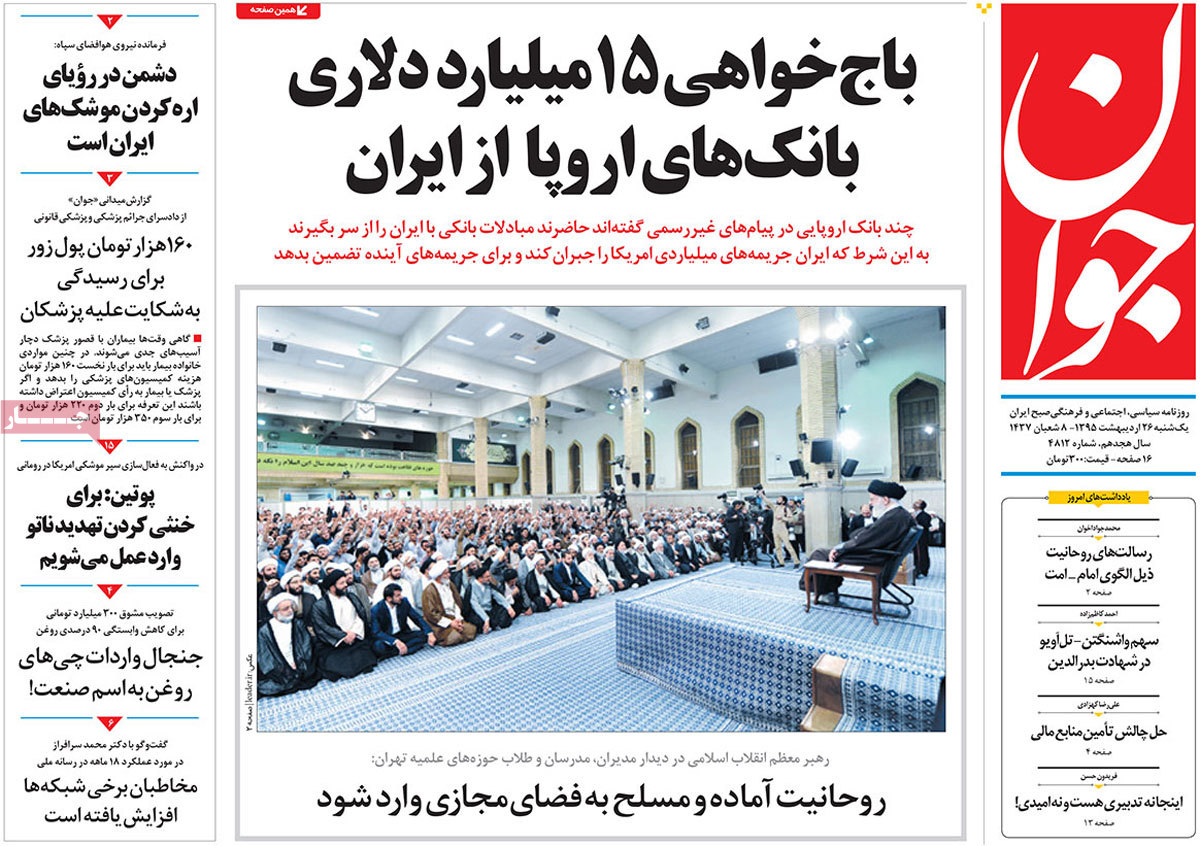 After a Friday (May 13) meeting with John Kerry, the heads of certain European banks said that the American official’s remarks had failed to convince them to resume banking ties with Iran.

However, an informed source in Tehran says that some of these bankers sent unofficial messages to Iran, expressing their readiness to start banking ties with Tehran on the condition that the Islamic Republic compensates them for billions of dollars’ worth of fines they have already paid to the US.

The Americans, therefore, are hypocritically suggesting that their Secretary of State, as a goodwill gesture, is encouraging European banks to resume their dealings with Iran, but that in the end it was the Europeans who refused to do so!

However, three days after Kerry’s closed-door meeting with the heads of 10 major European banks, unofficial reports relate a different story; a story that reveals European banks are aiming to demand a ransom from Iran.

Within the past five years, the US has imposed penalties of $15bn on Standard Chartered and HSBC, and $8.9bn on France’s BNP Paribas. However, an informed source close to the banking network says the European banks have asked Iran to pay $15bn compensation.

“European banks have also informed the Iranian side that it should provide guarantees to compensate for possible future penalties imposed by the US if it wants to resume ties,” the source added.

So far, it was believed that the US was the one stalling [the process of Iran’s return to the global economy]; however, Iran is now faced with ransom demands from certain European bankers. These banks claim that the remarks made by Kerry on Thursday have not only failed to allay their concerns [over the resumption of ties with Tehran], but have actually increased them.

There are observers who do not reject the possibility of a “good cop/bad cop” scenario. Kerry on Thursday repeatedly expressed concern over what he called Iran’s measures in the region, and in this way, he not only failed to allay the banks’ concerns, but also made them understand that the sanctions will continue on this pretext. He suggested that if these banks sign any deal with Iran, the country’s assets, and consequently part of the banks’ investments, could be easily confiscated by American courts.

This scenario is aimed at humiliating the Europeans, prolonging financial sanctions, and sanctifying the US: John Kerry, like a wolf in sheep’s clothing, is the main player behind this scenario, and is implementing it precisely. The US talks about terminating anti-Iran sanctions in the media so as to portray Europeans as cowards who are excessively terrified of this country. However, it secretly threatens them to practically scare these banks into avoiding ties with Tehran.

John Kirby, a spokesman for the US State Department, admitted on Friday, May 13, that his country’s officials had sent negative signals to European banks about their return to Iran.

“When the Secretary was in London speaking with European banking institutions, on more than one occasion in that meeting he raised very specifically our continued concerns about what Iran is doing in the region,” Kirby said in his press briefing.

The US knows that “Iran is a state sponsor of terrorism and that they have continued to support this particular group [Hezbollah] which is a designated foreign terrorist organization,” he added.

“… Here you have a country which, while living up to their commitments under the JCPOA, is certainly still conducting any number of destabilizing activities in the world and in the region. And we understand that and the Secretary was very clear about that,” Kirby told reporters.

The US spokesman, however, did not mention why Kerry had raised such an issue in a meeting aimed at giving assurance to European banks on the resumption of ties with Iran.

In a Thursday article, the Associated Press referred to US stonewalling in the JCPOA implementation, stressing that the US refusal to give written guarantees on the safety of trade with Iran is why European banks are reluctant to resume their ties with Tehran.

“Foreign governments, banks and other companies want written clarification from the US Treasury Department — essentially a guarantee they won’t be punished. But Washington is reluctant to do that, not wanting to appear to be softening its firm penalties for non-nuclear behavior,” AP reported.

In separate statements released after meeting with Kerry, the European banks Standard Chartered, Deutsche Bank, and HSBC announced that the American diplomat’s remarks had failed to convince them to resume their ties with Iran.

In a Friday article in the Wall Street Journal, Stuart Levey, the chief legal officer of HSBC Holdings and the former undersecretary for terrorism and financial intelligence at the US Treasury Department, provided the best explanation of why Kerry’s remarks were not convincing.

He argued that Washington’s double-standards, and its officials’ fears and hopes about the resumption of ties with Iran were the main factor behind European banks’ unwillingness to trade with Iran.

On Friday, US Republican Representative John Ratcliffe introduced the Iran Cyber Sanctions Act of 2016, which requires the administration to impose sanctions on hackers allegedly linked to the Iranian government. The measure pushes the administration to take action on an April 2015 executive order that authorized the Treasury Department to sanction individuals and entities who engage in malicious cyber activities against the United States.

“The danger posed by Iran’s increasingly sophisticated cyber capabilities has grown significantly over the past few years, and we must take these threats seriously,” Ratcliffe said, according to his personal website.

A couple of months ago, the US Justice Department announced it has indicted seven hackers associated with the Iranian government with cybercrimes.

Foreign Minister Mohammad Javad Zarif said on Saturday, May 14, that the parties to the Joint Comprehensive Plan of Action must discharge their obligations in a tangible way so that Iranian people would feel the positive results.

The Foreign Minister made the remarks in his speech to the inaugural ceremony of a conference entitled “JCPOA, the Economy of Resistance; Opportunities and Capacities” in Tehran, which was attended by Iranian foreign ambassadors.

The Iranian ambassadors should focus their efforts on helping the country’s economic growth and enhancing people’s living standards, Zarif said.

Referring to the opposition of certain parties in the US to the JCPOA, Zarif said that some of the opponents of the Iran deal, who have a record of supporting the Zionist [Israeli] regime, had tried to slow down the implementation of the deal by pursuing their own closed-minded views.

He said that the hostile approaches held by the JCPOA opponents in the US require Iranian ambassadors to exercise vigilance and push forward the goals of the Islamic Republic of Iran.

“We have gathered together here to exchange views on all the new chances and opportunities for making use of the JCPOA in the light of the Economy of Resistance,” he added.

Iran’s top diplomat also highlighted the significant role of Iranian ambassadors in presenting a true image of the JCPOA implementation and the efforts made by the administration to clarify the JCPOA achievements in the fields of banking and finance.

Any Request for Banking Guarantees in Ties with Europe Is Nonsense: Official