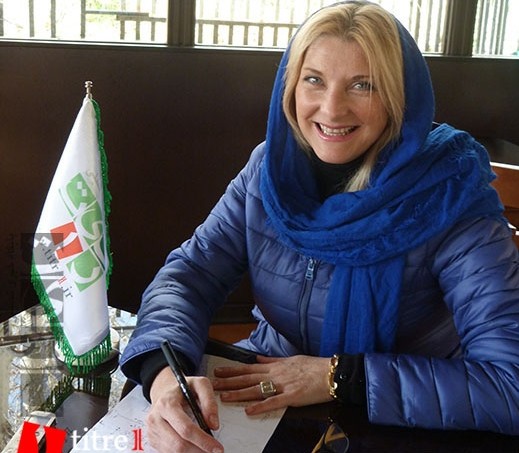 Tiziana Ciavardini, an Italian researcher, says that the West has fuelled Iranophobia to stop Iran growing.

Iran is a safe country which is making progress despite sanctions, said Tiziana Ciavardini, an Italian researcher and anthropologist, who has recently visited Iran to study the traditions and customs of Iranians.

Titre-yek, a news website, has published a detailed interview with her in several parts. The following is a brief translation of the first part of the interview:

[…] Iran is a vast country with diverse customs and subcultures which can be studied thoroughly. Politically, Iran is a very safe country in the region. It has managed to provide its people with safety far from war and bloodshed.

When you cross the border into another country, the blessing [security] Iranians enjoy in their homeland comes into focus. Security and calm are two key factors which are conspicuous by their absence in Iran’s neighbors, among them: Afghanistan, Pakistan, Iraq, Syria and even Turkey.

Security was in evidence in February. People turned out in force on February 11 [for rallies marking the victory of the Islamic Revolution 36 years ago]. This proves that security and calm exist in the country. I am here [in Iran] too because I feel safe.

[…] But why is that an Islamic country like Iran is portrayed in an opposite way in the West? In response, I should say there are a number of reasons for such an attitude in Western media.

One such reason is that they lack a good understanding of Iran and they build [their reports] on what they hear about Iran. I mean they are not in Iran to get a first-hand account of a real, Islamic Iran. They have read anti-Iran reports which are published, by design or by chance, and republish the same materials.

Another point – which I have mentioned in one of my articles – is creating enemies. Yes, that’s right. Certain Western countries really need to create enemies. They need to have an enemy. Do not doubt it.

Their like-minded media too have a similar attitude. You used Islamophobia, but I want to add to it “Iranophobia”, something which is being stirred up at a fast pace.

Iran is turning into a heavyweight in the Middle East, in the region and even in the world. It has friendly relations with Russia and China. It is growing in the areas of science and military by the day. It is not far-fetched that it [Iran] may pose a big threat to world powers such as the US.

Thus, one appropriate way to block Iran’s progress is fuelling Iranophobia and painting a negative picture of this country and the [Islamic] establishment for the whole world.

Why is it that sanctions are still in place? Iran is making progress and is close to becoming a trans-regional power despite the sanctions. Now assume Iran with no sanctions! […]

* IFP will separately translate the subsequent parts of the interview.

Tiziana Ciavardini is a cultural anthropologist and journalist. She was a researcher at the Department of Anthropology at the Chinese University of Hong Kong. She spent more than 23 years traveling, living for many years in the Middle East, Asia and Southeast Asia. She is the President of Ancis Anthropology Forum, a cultural association for the dialogue of religions and culture. Ciavardini has lived in Iran for more than 10 years and has published several articles, essays and books.
› Subscribe
Share
Facebook
Twitter
ReddIt
Email
Print
Telegram
WhatsApp
VK
LINE
Viber