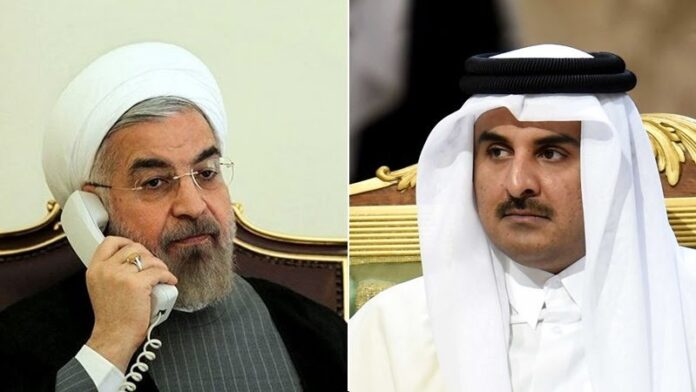 Speaking in a Thursday phone conversation with Qatari Emir Sheikh Tamim bin Hamad bin Khalifa al-Thani, Rouhani welcomed Qatar’s condemnation of the recent actions of the Israeli regime in Al-Aqsa Mosque and its severe attacks and crimes against Gaza.

“The bitter events of the past few days and the crimes of the Israeli regime emphasise the need for unity and cooperation among Islamic countries to confront the Zionist coercion and occupation,” he added.

Rouhani congratulated the government and people of Qatar on Eid al-Fitr, and said, “It is necessary for Islamic countries to cooperate with each other to defend the Palestinian people and the freedom of the country and confront the Zionist regime’s aggression and hostile and racist actions, which we have witnessed in recent days during the holy month of Ramadan.”

Rouhani called Palestine part of the World of Islam and added, “The attacks and aggression of the Zionist regime against the Palestinian people and Gaza must be stopped immediately and we must not allow these oppressed people to be oppressed anymore.”

He said the synergy of Islamic countries with Palestinian as its axis is a key goal.

“The Organisation of Islamic Cooperation (OIC) should play a more active role in the recent developments in Palestine, because the organisation was created primarily for addressing the Palestinian crisis and Al-Aqsa Mosque,” he added.

Referring to the situation in Yemen, Rouhani emphasised that there is no military solution to the crisis in the Arab country.

He also stressed the need for cooperation and efforts to resolve the crisis in the country and expressed hope that the UN-led peaceful motives for peace in Yemen would yield desired results.

In this telephone conversation, the President also referred to the good, developing relations between the two countries and the good bilateral approach that has been started in this field, emphasising the development and deepening of relations in various political, economic and trade fields.

He also expressed hope that the implementation and operation of the huge transportation plan known as the Silk Road will lead to greater economic prosperity between the countries in the north and the south of the Persian Gulf.

The Emir of Qatar also congratulated the government and people of Iran on Eid al-Fitr, and appreciated the Islamic Republic of Iran’s position on the recent developments and conflicts in Palestine.

“In condemning and pursuing the quick cessation of the attacks on Palestinians, Qatar has the same views as Iran and calls for the effective role of the OIC in this regard,” he added.

The Emir of Qatar also endorsed Iran’s approach to the Yemeni conflict and said, “Qatar believes that there is no military solution to Yemen’s problems and we believe that all actors in the Yemeni crisis have come to the conclusion that the only solution to the crisis is negotiation.”