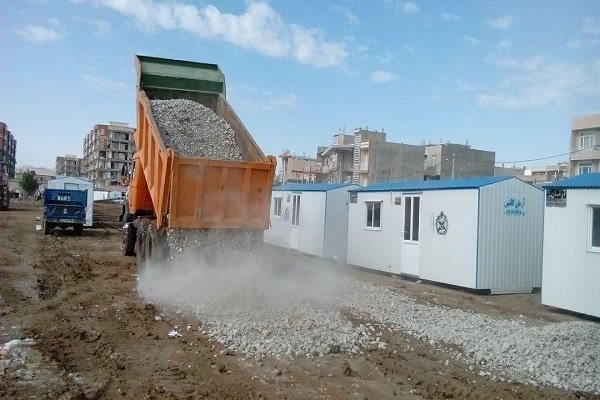 A commander of Islamic Revolution Guards Corps says the IRGC forces are building and transferring temporary shelters for the quake-hit people in the western province of Kermanshah.

Outlining the relief operations underway in Kermanshah Province, Head of IRGC Public Relations, Brigadier General Ramezan Sharif, said the IRGC will remain in the quake-hit areas until all the affected people are sheltered.

According to a Farsi report by Fars News Agency, he said at present, the IRGC is making 100 container houses (connex) for the people per day but the number will reach 400 in the coming days.

“Meanwhile, each day 150 container houses are transported from Tehran to the western regions.”

“Based on its extensive experiences gained during Bam devastating earthquake over ten years ago, the IRGC has developed an agenda to cope with natural plights across the country. We reformed our agenda after Varazaqan earthquake in northwestern Iran and now we are conducting our relief operations in Kermanshah with a clear roadmap,” he noted.

Sharif also said at present the IRGC is going ahead with a three-stage agenda in the quake-hit areas and added at the first stage of the operation, the armed forces of IRGC rushed to the quake-hit areas at the early hours of the quake and began to transfer the wounded to hospitals.

“During the second phase, the IRGC established equipped field hospitals in the areas which offer medical services to the affected people,” he added.

Sharif went on to say the IRGC is now involved in reopening the roads to the quake-hit areas by its latest technologies.

He referred to the visit of IRGC’s Chief Commander Major General Mohammad Ali Jafari to Kermanshah province and said the top commander ordered all IRGC units to provide Kermanshah and 6 neighbouring provinces with the required tents and foods.

Sharif said based on the Islamic Republic of Iran’s Constitution, accommodating the quake-hit people is upon the government.

Following Varazaqan quake, the IRGC established good cooperation with the government to provide temporary shelter for the quake-hit people and the two sides managed to build at least 7,000 houses and 12,000 shelters for live-stocks and poultry.

“Following Kermanshah province’s earthquake, the IRGC has made a deal with Housing Foundation of the Islamic Republic of Iran to build houses for the quake-hit people of the region,” he noted.

He referred to the public trust in the managing capabilities of the IRGC and said following the order of the Islamic Revolution Leader, “we are doing whatever in our power to provide shelters for the quake-hit people.”

He expressed hope the accommodation process of the quake-hit people of Kermanshah would come to an end soon and added the IRGC sees itself committed to remain in the areas till the sheltering of the people is accomplished.