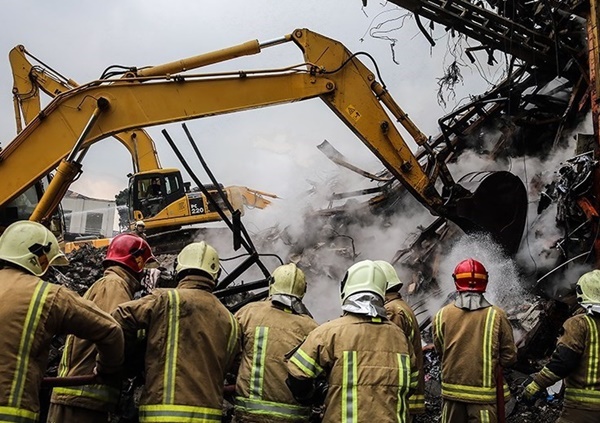 The forces of IRGC’s Construction Base have been actively involved in debris removal and rescue operations at the scene of the Plasco building incident since a few hours after the collapse, an official noted.

According to a Farsi report by Al-Alam News Network, the Plasco building came down after fire engulfed the top floors of the 17-storey building on Thursday (January 19) morning, leaving at least 25 dead and over 200 wounded.

Noorollah Sadra, the deputy head of Karbala Expert Group at the Khatam-al Anbiya Construction Base, a conglomerate belonging to the Islamic Revolution Guards Corps (IRGC), said the teams were immediately sent to the location of the incident at the order of the Base’s commander, Brigadier General Ebadollah Abdollahi, on the first night.

He said currently, 48 people, equipped with metal cutting machines, in 12 groups are clearing away rubble and cutting iron girders blocking access to the basement.

The forces of the Base are working round-the-clock in three shifts, he stressed, adding, “Since Monday, we have been using heavy equipment to remove construction waste. Including the staff operating heavy machines, the number of the Base’s rescue forces at the venue of the incident amounts to 100. The machines include bulldozers, cranes and excavators. A number of forces are also on standby to be added to the rescue teams with lorries.”

Sadra said due to the sensitivity of the operations, using heavy equipment to recover bodies from the rubble or rescue entrapped people is subject to restrictions at the request of certain administrative agencies and organizations.

“We have also deployed a number of specialized machines at the venue of the incident, to be used under the exigent circumstances.”

Commenting on the Base’s potentials in terms of human workforce and equipment, Sadra said it has more than 45,000 expert forces who can come to the rescue in similar incidents.

The Base’s teams will continue their activities at the scene of the incident until the debris is removed completely, he assured, adding, “We are prepared to participate in future rescue operations at full capacity.”