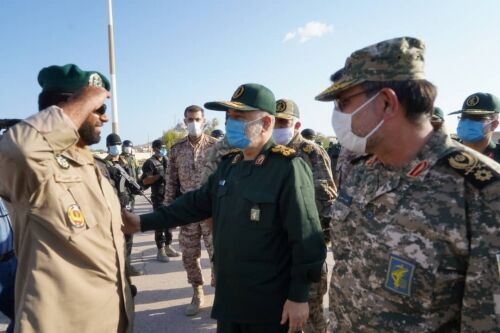 Chief-Commander of Iran’s Islamic Revolution Guards Corps Major General Hossein Salami has paid a visit to the IRGC’s military base and facilities in Abu Musa Island as tensions with the US escalate.

Speaking to reporters on the sidelines of the visit, General Salami said the three Iranian islands of Abu Musa, Greater Tunb and Lesser Tunb are inseparable parts of Iran’s national independence and the country’s defensive forehead in confronting ultra-regional enemies.

He described the defensive and combat preparedness of the IRGC units in these three islands as reassuring, strong, and unbreakable, and said, “Today we are here to assess and make sure about the preparedness of our power in the sea and in confrontation with enemies who sometimes make verbal threats against us.”

“We would respond with a reciprocal, decisive and strong blow to whatever action the enemy would take against us,” Salami warned.

“Among those capabilities is the ability to counter hostile submarines,” he added.

Smart naval mines with amazing operational capabilities, the ability to drop smart bombs from manned or unmanned aerial vehicles which can destroy hostile targets deep inside the sea, and a new generation of Vertical Take-Off and Land (VTOL) drones are among other capabilities of the IRGC navy.