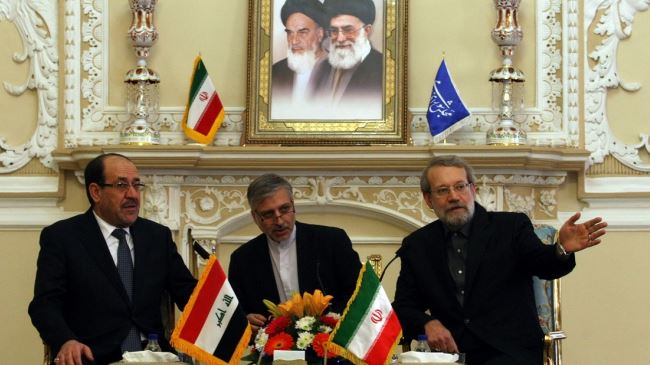 There is ample potential for the further growth of Tehran-Baghdad relations, said the Iranian top MP.

Iran’s Majlis Speaker Ali Larijani has underlined the importance of a secure Iraq to its neighbors, saying Tehran has thrown its weight behind efforts toward that end.

“Establishment of security and stability across Iraqi territories is important for all the neighboring countries from the regional point of view and Iran has spared no effort in this respect,” Larijani said at a Monday meeting with visiting Iraqi Vice President Nouri al-Maliki in Tehran.

He pointed to the existing friendly ties between Iran and Iraq in different political and economic arenas as well as the ample potential for the further growth of such relations.

Larijani also touched on the presence of ISIL terrorists in Iraq and the so-called coalition led by the US against the Takfiri group, adding, “The terrorist and inhumane activities of the group knows no borders and mere airstrikes cannot purge the region from the filth of [ISIL].”

The top Iranian lawmaker praised the Iraqi nation’s resistance against ISIL and expressed optimism that calm and peace will soon be restored to Iraq.

Maliki, for his part, lauded Iran as a great country and a friend of Iraq at different junctures in the post-Saddam era, noting that all Iraqis consider Iran as a real ally during difficult times and crises.

He noted that the Iraqi nation’s campaign will soon put an end to the terrorist actions of ISIL, which indiscriminately targets all ethnicities in the country.

The ISIL terrorists currently control large areas of Iraq. The group sent its militants into Iraq in June, seizing large swathes of land straddling the border between Syria and Iraq.

The Iraqi army has managed to make major gains in the fight against the ISIL militants in recent weeks.