Iran’s Shamkhani Calls on Muslim World to Unite against US 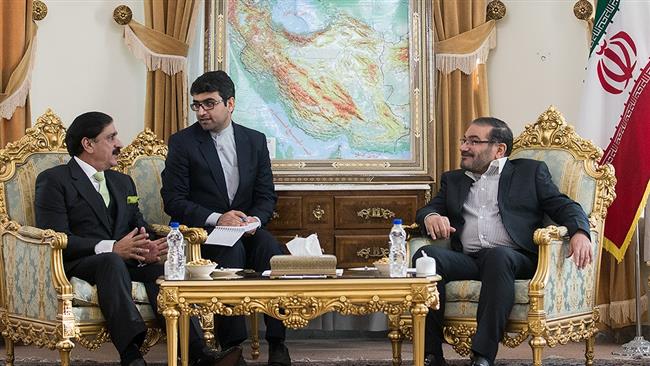 A senior Iranian official has told Pakistan's national security adviser that Muslim nations need to forge closer cooperation given the US policy to create divisions among them.

“The United States’ dishonest, duplicitous and divisive policy towards Muslim countries, including Iran and Pakistan, requires that they bolster cooperation against America in addition to maintaining vigilance and taking preventive measures,” Ali Shamkhani said Sunday.

The secretary of Iran’s Supreme National Security Council made the remarks during a meeting with Lieutenant General Nasser Khan Janjua whose country, like Iran, has recently come under unprecedented attacks by US President Donald Trump.

Shamkhani underlined the need to safeguard joint borders between Iran and Pakistan and make joint efforts to fight drugs as well as human and weapons trafficking.

“We will not allow some countries to affect relations between the two countries through sending weapons and hiring terrorists to create insecurity on their borders,” he added.

The Iranian official further touched on the necessity of lifting the Saudi blockade on Yemen, saying Muslim countries and the international community support political talks among Yemeni groups and seek an end to the bombardment and siege of the country.

Shamkhani also described the Palestinian issue as the top priority of the Muslim world.

The official highlighted cultural and religious commonalities between Iran and Pakistan and called for enhanced ties in all sectors, especially in countering their common threats.

The Pakistani official, for his part, highlighted the need for Muslim countries to exercise vigilance against foreign conspiracies hatched to increase rifts among them.

He further emphasized that Islamabad would develop its security and economic cooperation with Tehran.