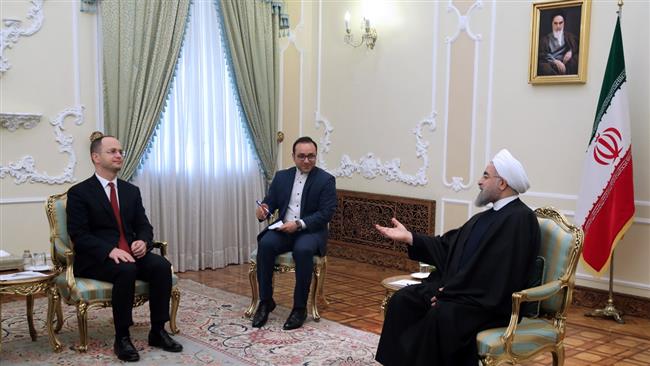 Iranian President Hassan Rouhani says the Islamic Republic has always called for and moved in line with the promotion of peace and stability in the Balkans.

“Tehran is ready to cooperate with different countries, including Albania, to fight terrorism,” Rouhani said in a meeting with Albanian Foreign Minister Ditmir Bushati in Tehran on Sunday.

The Iranian president stressed the importance of making collective efforts to fight violence, extremism and terrorism, noting, “Terrorism is a global issue and battling against violence, particularly terrorism, is one of our main duties.”

He further stated that the implementation of last year’s nuclear agreement between the Islamic Republic and the P5+1 group of countries has created a favorable opportunity for the expansion of Iran-Albania ties in all sectors, particularly in economy and trade.

Rouhani said Tehran welcomes further bolstering of relations with Tirana, which would be beneficial to both sides.

Iran and the five permanent members of the United Nations Security Council – the United States, France, Britain, Russia and China – plus Germany started implementing the nuclear deal, known as the Joint Comprehensive Plan of Action (JCPOA), in January 2016.

Under the nuclear deal, Iran undertook to put limitations on its nuclear program in exchange for the removal of nuclear-related sanctions imposed against Tehran.

The Albanian foreign minister, for his part, said the JCPOA opened a new chapter in Iran’s cooperation with different countries, including Albania.

He also stressed the importance of fighting terrorism, extremism and violence in a unified manner.

Earlier on Sunday, Bushati held talks with Iranian Foreign Minister Mohammad Javad Zarif. At the end of the meeting, both parties signed a memorandum of understanding to hold regular political talks.