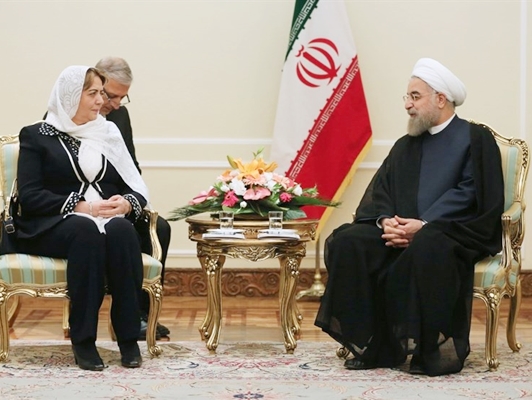 Iranian President Hassan Rouhani pledged unwavering support for Syria in the fight against terrorism, saying Tehran favors Syria’s territorial integrity and unity and opposes any change in the borders across the region.

“The Islamic Republic of Iran will keep assisting Syria in the fight against terrorism and in the establishment of security in the region,” President Rouhani said at a meeting with Speaker of the People’s Council of Syria Hadiya Khalaf Abbas, held in Tehran on Tuesday.

Such help for Syria is based upon Iran’s deeply-held belief that terrorism is a serious threat to the region and the world, the president added.

He also noted that efforts to preserve territorial integrity and solidarity of regional countries, including Syria, is a principle behind Iran’s policies, underscoring that changes in the borders would not benefit the region at all.

For her part, the visiting Syrian speaker praised Iran for backing her country from the outset of crisis in 2011.

She also made it clear that the Syrian nation is the only entity entitled to decide the fate of the Arab country, recommending big powers, the US in particular, to try to stem terrorism if they are to provide any help.

Khalaf Abbas arrived in Tehran on Monday at the invitation of Iranian Parliament Speaker Ali Larijani.