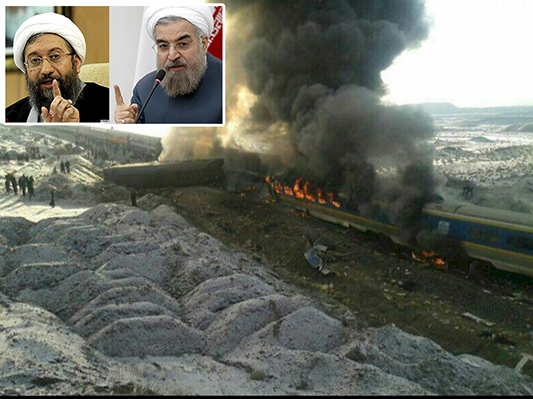 Iranian President Hassan Rouhani and Judiciary Chief Ayatollah Sadeq Amoli Larijani in separate messages ordered action to ascertain the cause of a deadly train crash in the province of Semnan, to find those possibly at fault, prevent the recurrence of such incidents, and provide immediate relief aid for the injured.

In a letter to First Vice-President Eshaq Jahangiri, President Rouhani expressed grief at the loss of people in the Friday’s train crash, including a number of the Islamic Republic of Iran Railways staffers.

He also assigned the responsible organizations, particularly the Roads and Urban Development Ministry, the job of investigating the incident, finding its causes and identifying the individuals possibly at fault.

Moreover, the president called for necessary technical and managerial measures to stop a recurrence of such incidents, Tasnim reported.

President Rouhani further commanded the medical and rescue organizations, particularly the Health Ministry, to do whatever possible to take care of the injured and administer treatment to them.

The Judiciary Chief Ayatollah Amoli Larijani also urged the Chief Justice of Semnan Province to immediately start probing into the issue and prosecute the culprits behind the tragic accident.