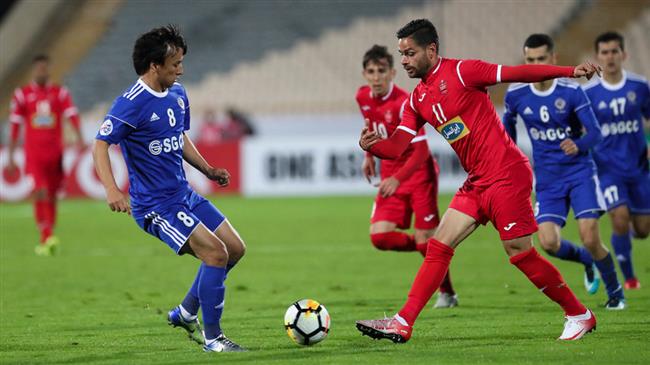 On Tuesday evening, the Iranian soccer players succeeded to defeat the Uzbek side 3-0 at the end of a Group C fixture played at the Azadi Stadium in western Tehran.

Persepolis soccer players opened the match with vim and vigor, and approached their opponents’ goal on a number of occasions.

Persepolis 28-year-old Nigerian footballer Godwin Mensha took advantage of an ideal opportunity in the 20th minute, and headed home Vahid Amiri’s cross from the right flank to put his side on the scoreboard.

After the interval, Persepolis striker Ali Alipour collected a pass from right-back Sadegh Moharrami. He unleashed a shot into the top corner from inside the box in the 66th minute to double his red-clad side’s lead.

Alipour added his second of the match five minutes later, when he received a pass from Mohammad Ansari and drove it low with his left into the back of the net to make it 3-0.

Al Rayyan captain Rodrigo Tabata opened their own goal just seven minutes into the match at the Jassim Bin Hamad Stadium in the Qatari capital city of Doha.

Tabata committed a dangerous tackle on an Esteghlal’s player in the 80th minute, and was subsequently sent off.

Ali Ghorbani was on target in the 88th minute, and bagged a point for the Iranian team.