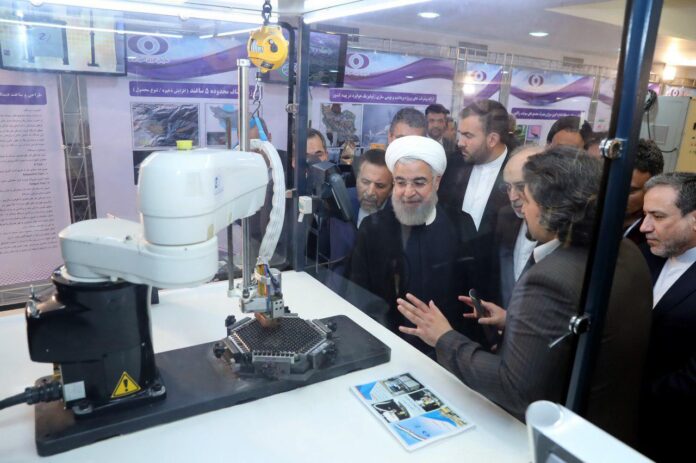 Iranian President Hassan Rouhani has rejected the claims that the country’s centrifuges are not spinning, emphasizing that Iran’s nuclear industry is now stronger than before.

“Some think that Iran’s nuclear movement has dried up in the 11th and 12th administrations, and our centrifuges are either not spinning or spinning slowly,” Rouhani said in an address to a ceremony to unveil 83 nuclear achievements on the National Nuclear Technology Day.

“I would like to tell the Iranian nation that our nuclear industry is currently moving forward more strongly and accurately than before,” he noted, adding that the clear message of the nuclear achievements unveiled on Monday is the faster spinning of Iran’s centrifuges.

“In scientific technology, we have treaded our own path, and will continue to do so,” the Iranian president noted.

Rouhani noted that the Joint Comprehensive Plan of Action (JCPOA), the nuclear deal between Tehran and world powers, has not slowed down Iran’s nuclear program.

“We have established new centres in Fordow for research. We started nuclear trade following the JCPOA,” he noted, vowing that the country’s nuclear research will be carried out faster than ever.

He further pointed to the provocative moves by the US and its Western allies to make Iran violate the nuclear deal.

“If we sign a deal, we will not be the first to violate it. They tried very hard to provoke Iran into breaching the JCPOA. It has been 15 months that a newcomer in the US is making numerous claims, trying to tear up the nuclear deal, but its structure has been so strong that it has survived up to now.”

“They spent a lot of money to shake the structure of the JCPOA, but to no avail. Even if one day they manage to damage this structure, they would be damaging their own reputation,” he stressed, adding that Tehran is prepared for any situation.

The Iranian president referred to the Islamic Republic’s defensive program and said, “We don’t think of threatening anyone. Our military power is not for aggression. Those who make false claims will understand they are wrong.”

“Our weapons and missiles are for defence. We need them to ensure our security in this insecure world. Our weapons are not to be used against our neighbours.”