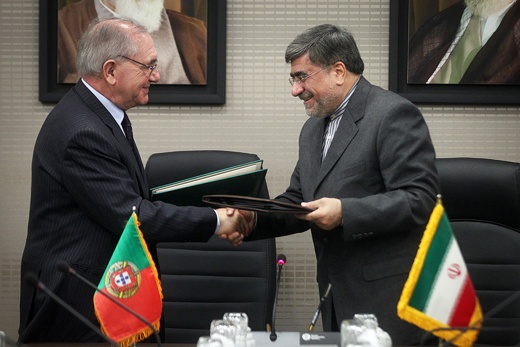 Jannati expressed readiness for expansion of bilateral relations between Tehran and Lisbon in different fields and for exploiting the two countries' cultural potential.

Iran has cultural agreements with many countries with some as old as half a century, Minister of Culture and Islamic Guidance Ali Jannati said in a meeting with Portuguese Foreign Minister Rui Machete in Tehran Tuesday.

At the meeting in which the two ministers signed a cultural agreement, Jannati said, ‘There is a solid base for expansion of bilateral relations and the two countries can have extensive cultural exchanges in the next couple of years.’

Referring to Iran Cultural Week held in Lisbon, Jannati said Iran presented various artworks among other things in music, cinema, at the event and ‘we hope to see Portuguese artists in Iran soon’.

He invited Portuguese film makers to participate in Fajr Film Festival which is held in Tehran annually in February.

Meanwhile, the Portuguese foreign minister called for the implementation of the cultural agreement, saying bilateral relations go back to the 16th century.

Machete expressed hope that the two countries would be able to present their art works to each other.