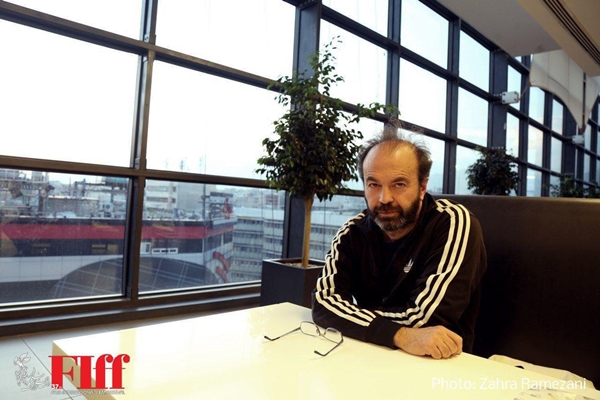 The Senegalese-Lebanese juror of the 37th International Fajr Film Festival says the atmosphere of the event shows we are dealing with a festival that is “genuine” and does its job well.

Ghassan Salhab, who is a juror of the First Films section of this year’s Fajr Festival in Tehran, says the character of Iranian filmmakers and the quality of their films keep him interested in Iran’s cinema.

Salhab was born in Dakar, Senegal, and grew up in Lebanon. He sees himself not only a national of Senegal and Lebanon, but from all over the world.

In addition to making his own films, he has collaborated on many screenplays and teaches cinema in Lebanon. He has directed seven feature films all of which have won awards in various international film festivals.

Here is an interview conducted with him:

Q: You have attended many festivals as juror. How do you assess the Fajr International Film Festival?

A: This is the first day I’m here and I’ve only watched three movies but the festival’s atmosphere and the quality of the films I saw prove that we are dealing with a genuine festival; a festival that does its job in the best way possible. Fajr has been held for 37 editions and has a good reputation. I knew Fajr Festival before it screened my first feature film 21 years ago.

Q: Do you know the Iranian cinema?

Q: How do you assess the three movies you’ve watched so far?

A: Two films were very good but I can’t name them since I’m a jury member. When I looked at the list of the movies, I realised that most films are Asian and that’s normal.

I think one of the reasons for the absence of Western films is the stupid US sanctions and the Western countries’ irrational compliance. Of course, I was a little bit surprised because there are not many films from the countries of East Asia such as Taiwan, Korea and Japan.

Anyway, I’m so glad to be here, because I’m essentially a curios person and I’m very eager to see the different parts of the world and of course, I was always keen on visiting Iran.