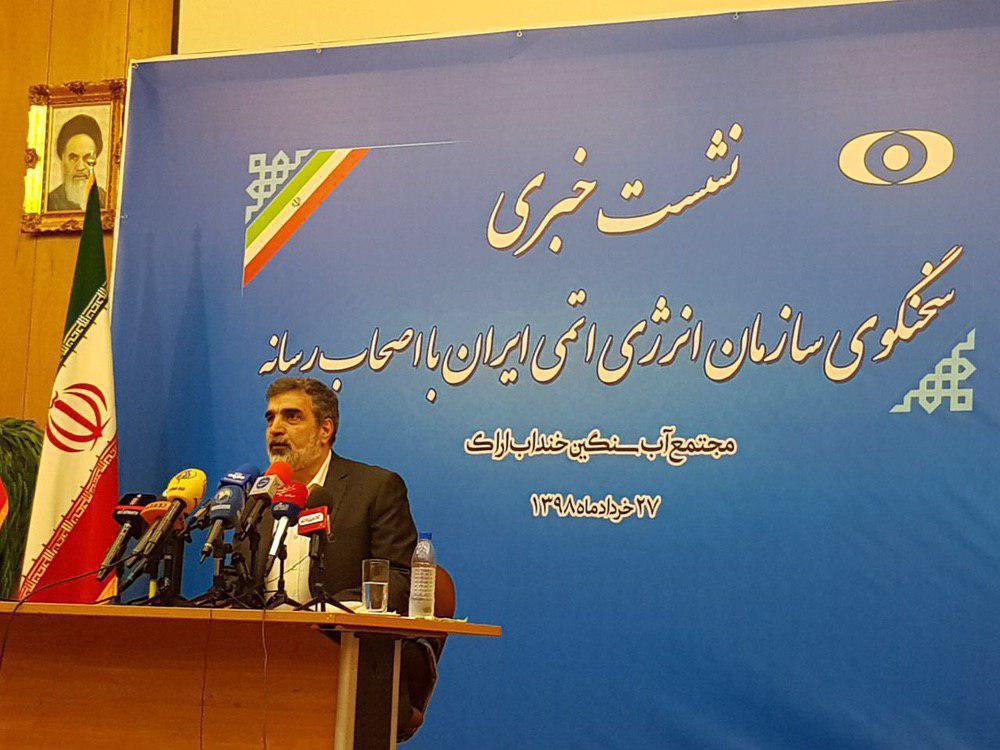 Iran says its stockpiles of enriched uranium will exceed the 300-kilogram limit set by the Iran nuclear deal on June 27.

According to the Spokesman of the Atomic Energy Organization of Iran (AEOI), the move is part of Tehran’s decision to reduce some of its commitments under the 2015 nuclear deal with world powers in reaction to the other parties’ failure to live up to their commitments.

Behrouz Kamalvandi told a press conference at the site of the Arak nuclear facilities on Monday that the increase in uranium stockpiles is based on the Articles 26 and 36 of the Joint Comprehensive Plan of Action (JCPOA).

He also announced that the country’s heavy-water stockpiles will exceed the 130-tonne limit set by JCPOA within 2.5 months.

Kamalvandi said US President Donald Trump thinks Iran would shut down its facilities if no one buys its heavy-water.

However, he added, Iran has domestic use and we can also sell it in market.

He also noted that the decision is reversible in case other parties to the deal implement their commitments. “The Europeans still have time to compensate.”

The announcement came almost 40 days after Iran gave the Europeans a 60-day deadline to fulfill their commitments under the nuclear accord; otherwise, Iran has vowed to take “further measures” after the two-month period.

Iran will make decision about the level of its uranium enrichment after the 60-day deadline, Kamalvandi said Monday.

We’re waiting for the decision of the country’s top authorities, but for now we are thinking of different scenarios including an enrichment level of 3.68 percent and more, he noted.

The level can be 5 percent for Bushehr nuclear power plant, and 20 percent for Tehran research reactor, he predicted.

Iran-EU Relationship May Result in Divorce

“If it is important for them [Europeans] to preserve the nuclear deal, they have to work. Iran will no longer wait for their actions.”

The current circumstances may cause the Iran-EU relationship to result in divorce, he warned.

“In the second phase of reducing its JCPOA commitments, Iran won’t any more feel obliged to not return to the previous reactor. It’s said it’d take 6 months to 1.5 years, but it can take place sooner,” he added.

He said various scenarios are available to the Iranian officials. “An overhaul is well carried out on the heavy water reactor, and its capacity can be increased.”

China Working with Iran on Heavywater

“The United States has been discouraging China [from buying Iran’s heavywater] with the perception that if Iran does not have a re-designed reactor, it does not need heavy water. Americans in the last waivers had said that nobody should buy Iran’s heavy water. Fortunately, the Chinese, whom we have been contacting for the past two weeks, are working well with us. The designing is carried out by us. We are now in the stage of supplying the equipment that Europeans can supply, and this is a good criterion if they provide the equipment. We can produce a lot of equipment, but if they give us the facilities, we will work more quickly,” he noted.

Kamalvandi also warned that if they [Europeans] want to work on technical issues politically, Iran will continue its own strategy.

Referring to the US bans, the Iranian official noted that Washington’s sanctions on radiomedics industry is an instance of “terror”.

However, he added, “fortunately, nothing serious happened because we have enough capacity to produce them.”

“We are in good condition to move forward through accelerating the development of our nuclear industry. God willing, we will make progress in all areas of the nuclear industry. Everyone is listening to the Leader and this industry will not be shut down,” he stressed.

“This is an important test for Europe. It is not in their interest if the United States assigns them what to do. There are many options [for us] in the technical field. The Islamic Republic is currently moving on a slope. If they do not take any serious action, there would be more serious options on the agenda.”

Kamalvandi also underscored that Iran is implementing the Additional Protocol voluntarily saying that as long as Tehran adheres to the NPT, it must carry out the safeguards.