Iranian President Hassan Rouhani says the country’s defensive capabilities are aimed at maintaining sustainable peace in the region, not attacking others.

Speaking in Tehran on Tuesday on the occasion of National Day of Defence Industries, President Rouhani said Iran’s history demonstrates Iranian people form a peace-loving nation that lends a helping hand to others when necessary.

Iran could have followed opportunist policies regarding its northern neighbours following the breakup of the Soviet Union, he noted.

“If we were aggressors, we could have seized the chance when the Soviet Union collapsed and their borders became unstable. But we didn’t do that and instead, we offered help to the newly-created countries,” he said.

Pointing to Iran’s role in the anti-terror fight in the region, Rouhani said the country paid a heavy cost for rooting out terrorists in the region, even though it was not directly threatened by terrorists operating in Iraq and Syria.

Rouhani made the remarks in a ceremony during which the country’s first homegrown fighter jet, named Kowsar, was unveiled. 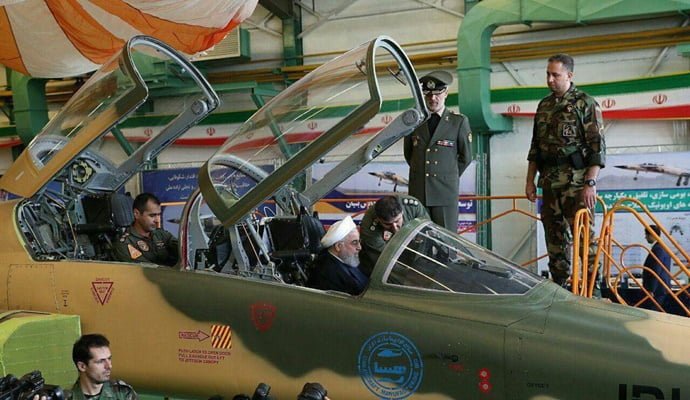 Rouhani said Iran’s adversaries have for years been spreading Iranophobic propaganda that Tehran’s military power and its missiles are a threat to the region’s calm and tranquility.

The president said this is while Iran uses its military might to deter enemies from attacking the country and to promote peace in the region.

The president said Iran’s negligence in boosting military deterrence is equal to showing a green light for aggression to its adversaries.

Rouhani said US President Donald Trump has put the US at loggerhead with not only Iran, but even its allies such as the EU and Canada.

“In this sensitive juncture, our defence power is of utmost importance … as we have enemies who do not respect any principle,” he said.

The president said the US is waging a full-scale economic war against the Islamic Republic, and the only reason why it is not attacking Iran is the high costs associated with such an invasion.

“This is not about the US being concerned about people’s lives; it’s about Iran’s power. [The US] is aware of the results and costs of this [invasion],” he said.