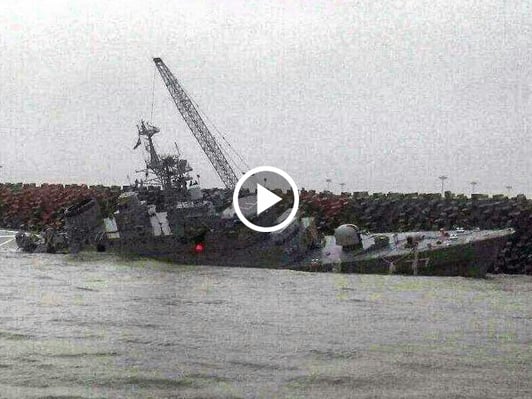 A video circulated in the Iranian media shows the giant homegrown destroyer Damavand has fully sunk in the Caspian Sea a couple of weeks after it suffered damages during the stormy weather of Anzali Port.

The destroyer, which reportedly sank on Sunday, January 28, had crashed with Anzali Port’s jetty on January 10 and suffered minor damages when docking at the port.

Increasing wind speed and severe storm in the Caspian Sea was the cause of the crash; however, the Navy had declared it would be repaired in a short time.

Damavand, a 100-metre-long destroyer weighing more than 1300 tons, officially joined the Navy’s northern fleet in the Caspian Sea in March 2015.

More than 700 industrial, research and academic Iranian centres cooperated in designing and producing the military vessel, which was also a training warship.

Experts at Iran’s Defence Ministry had installed 25 homegrown electronics and communication systems on Damavand, including advanced naval radars and systems for communication, detection and interception.

Damavand was a Jamaran-class destroyer with unique features to meet the demands of the Iranian naval forces in the country’s northern waters.

The advanced destroyer was capable of tracking aerial, surface and sub-surface targets simultaneously.