As Iran’s food industry is suffering from the mass effects of contraband goods, new campaigns created with the main theme of supporting domestic products can play a key role in promoting job creation and economic production in Iran’s food industry and help the industry leave behind its current recession.

According to a Farsi report by the Shahrvand daily newspaper, one of the main sectors in the food industry which is now working based on international standards is chewing gum production.

Today, the sector has managed to create a campaign to get in direct touch with the people. The campaign helps anyone in the society to get familiar with the production process of chewing gum. This has created a positive feeling in the people, prompting them to buy new chewing gum types produced by domestic producers.

The campaign which has been underway for at least two weeks has been warmly welcomed by the people. Meanwhile, some chewing gum companies have presented their new products to some celebrities like Iranian famous traditional singer, Homayoun Shajarian, and popular TV puppet character, Jenab Khan.

It is noteworthy that smuggled chewing gum types which are usually offered with low prices can threaten the people’s health. Meanwhile, they also threaten the existence of Iranian-made chewing gums, leaving many working in the industry jobless.

Iran’s chewing gum market, one of the leading markets in the Middle East, is currently filled with products imported from other countries. 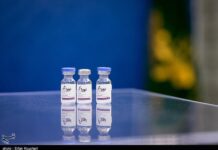