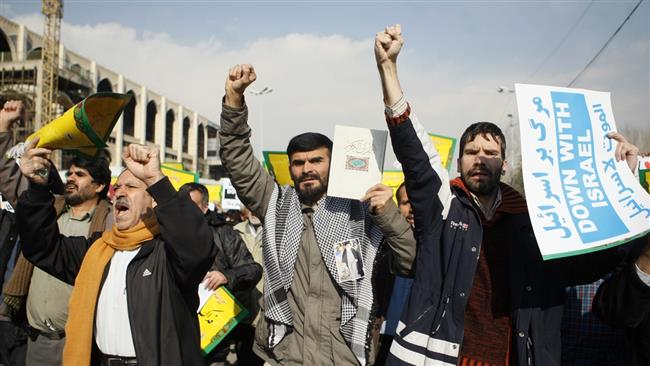 Tens of thousands of the Iranians have taken to the streets across the country to express their wrath at the recent publication of a sacrilegious cartoon of Prophet Mohammad by the French magazine, Charlie Hebdo.

Large crowds of people in the Iranian capital, Tehran, and other cities took part in the rallies after Friday prayers and expressed their outrage at the offensive cartoon.

The protesters carried flags and placards in reverence for Prophet Mohammad and shouted slogans against France, Israel, the US, and Britain.

The protests come after Iranian students on Monday gathered in huge numbers in front of the French embassy in Tehran in protest at Charlie Hebdo’s sacrilegious move.

On January 14, the French weekly, whose Paris office was attacked by two gunmen on January 7, once again published a cartoon of Prophet Mohammad on the cover of its new edition despite warnings that the move is provocative.