Iranians Protest US’ Policies with ‘Stop Meddling in Iran’ Hashtag 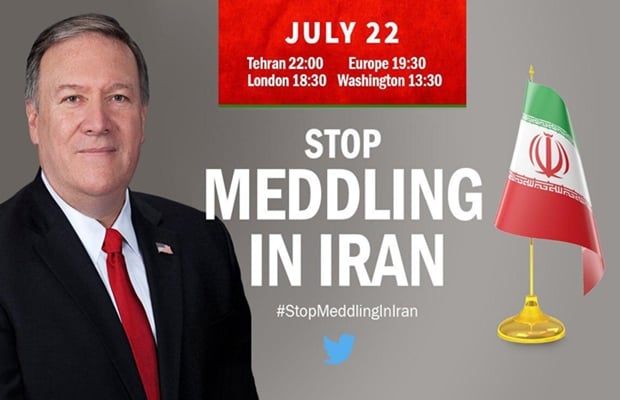 A huge number of Iranian people from all walks of life and with various political orientations posted tweets and Instagram posts on Sunday night to express their protest against the US’ hostile strategy towards Iran and meddlesome policies over the past decades.

Iranian netizens, from reformists to conservatives and independents, shared posts in Twitter and Instagram with the hashtag #StopMeddlingInIran a few hours before US Secretary of State Mike Pompeo delivered a scathing attack on Iran.

Azar Mansouri, a pro-reform politician, wrote in her Twitter account that the US withdrawal from the Iran nuclear deal has proved to Iranians that Washington is untrustworthy.

“JCPOA was a national demand and the Iranian people pinned their hope on the outcome of JCPOA. A government that stands against the Iranians’ demands is not entitled to intervene in Iran’s domestic affairs and talk on behalf of this people,” she said.

Another user wrote, “We are critical of the government. We believe there are faults in the system. But we stand on our own feet and fix our problems.”

Many users tweeted about the bitter memories of foreign meddling in their country and the history of US crimes against Iran.

Saeed Shariati, a reformist figure, pointed to the deaths of over 40% of the Iranian population as a result of the widespread famine in Iran during World War I, which is blamed on British troops.

Some posted photos of Mohammad Mossadeq, the democratically-elected prime minister of Iran whose government was toppled in a coup co-orchestrated by the US and UK in 1953, suggesting the US has not been a friend to Iranians even before the 1979 Revolution. The coup came only two years after Mosaddeq nationalized Iran’s British-run oil industry.

Some others pointed to the US’ support for the Iraqi dictator Saddam Hussein in his attacks on Iran in the 1980s and the downing of an Iranian civilian plane by the USS Vincennes over Persian Gulf waters in 1988.

Former political prisoner Emad Bahavar posted a quote from Ebrahim Yazdi, Iran’s foreign minister in early days of the 1979 Revolution, saying that “democracy cannot be found in the backpack of US soldiers”.

The Twitter storm came before Pompeo levelled a series of criticisms against Iran’s leaders on Sunday in a speech in California and called for increased pressure on the country.

“We are asking every nation who is sick and tired of the Islamic Republic’s destructive behaviour to join our pressure campaign. This especially goes for our allies in the Middle East and Europe, people who have themselves been terrorized by violent regime activity for decades,” Pompeo said.

Pompeo stopped short of calling for regime change, but he announced stepped-up US government broadcasting in Persian that is likely to foment further unrest against the government.

“The goal of our efforts is to one day see Iranians in Iran enjoying the same quality of life that Iranians in America enjoy,” Pompeo claimed.