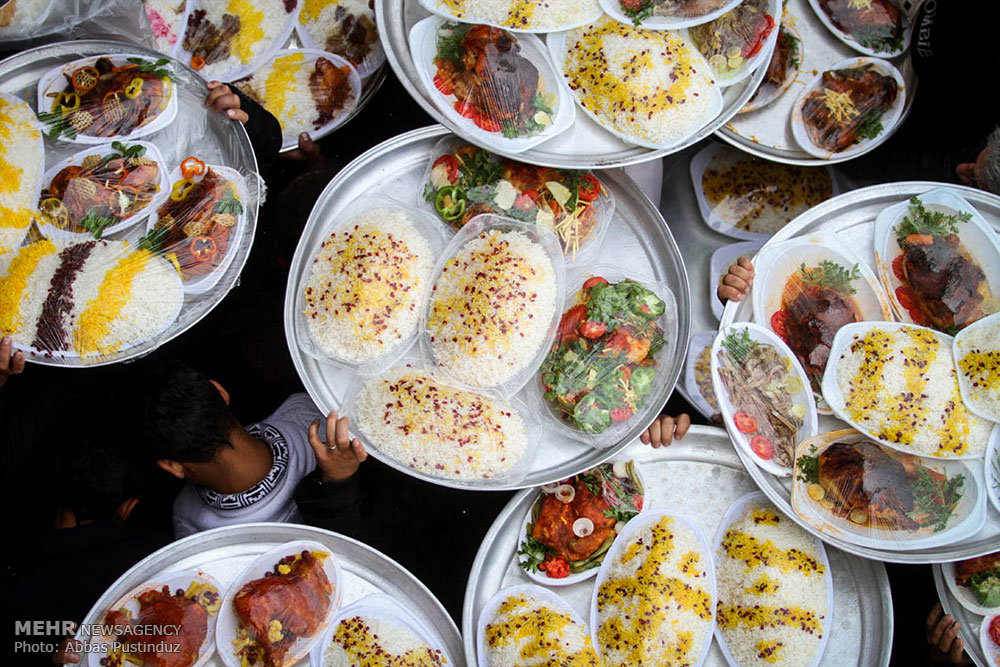 Preparing votive food in the month of Muharram is one of the traditions of Muslims, especially the people of Iran. During the months of Muharram and Safar on the lunar calendar, Shia Muslims mark the martyrdom anniversary of the third Shia Imam, Hussein ibn Ali, and also the Fourteen Infallibles.

On these occasions, people cook votive food in mosques and even in the courtyards. The cooking of the votive food is usually the responsibility of the men of the families or of the skilled and professional cooks.
In different cities of Iran, various kinds of foods are prepared as offerings, some of which we will discuss below.

Garmsar in central Iran is one of the cities that prepares a special food for mourners during Muharram. For this dish, the raw meat is cooked in the drained rice, and the bottom layer of the food in the rice pot, which absorbs all the meat juice, becomes the most delicious part of the dish. Raisins are also sprinkled on the rice. During the Muharram mourning days, people of Garmsar usually leave the doors of their homes open to all those who want to participate in the ceremony, so the mourners can participate in this ceremony and get votive food without being invited. 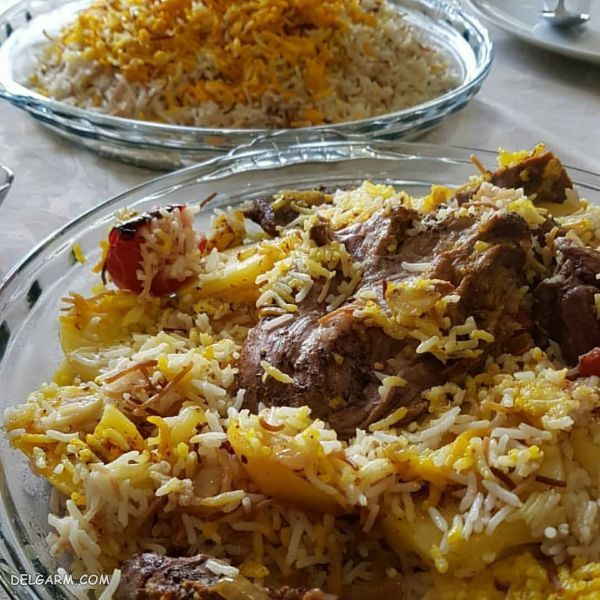 Qeimeh with Sweet Pilaf of Shiraz and Boushehr:

Qeimeh is an Iranian stew consisting of mutton, tomatoes, split peas, onion and dried lime. The stew that people of Shiraz and Bushehr in the south prepare is like the other regions, but Bushehris are interested in a softer Qeimeh. The special feature of this food is that it is served with sugar pilaf. This pilaf is made of rice, sugar, saffron, tangerine slices and pistachios. 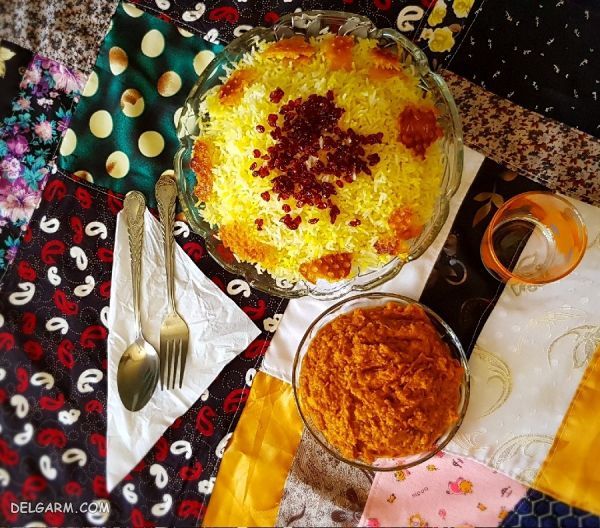 Sholeh Mashhadi is almost the most famous dish of the northeastern Khorasan province which can hardly be found in other cities. This dish is a type of stew the main ingredients of which are meat and pulses. It is very similar to the Persian Halim. Sholah cannot be easily ordered from any restaurant, even in Mashhad. On normal days, people do not cook that much Sholeh, but during Muharram, unlike the other days, Sholeh is prepared in great amount for mourners. People who are from Mashhad have a high level of admiration for this dish. 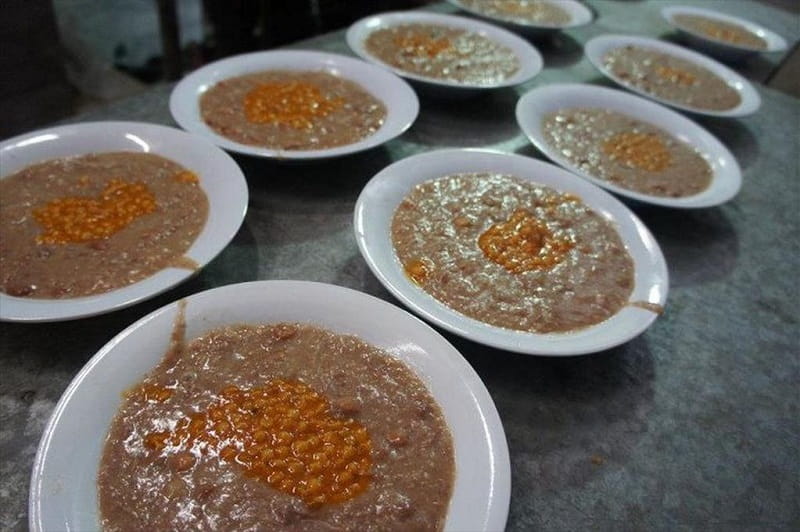 Meat and Beans of Kashan:

In Kashan, Meat and Beans or Gousht-e Loubiab is served on religious occasions along with rice mixed with dill. This dish, as its name suggests, is made with meat and beans, but does not have much water and is served with pilaf. Mutton, beans, potatoes and spices are the main ingredients of this dish. You should first season lamb’s meat and braise it with onions and turmeric for a while. Add the white beans and let it cook until the meat and the beans are cooked. You can also add rice, dried lime and dried fenugreek leaves. 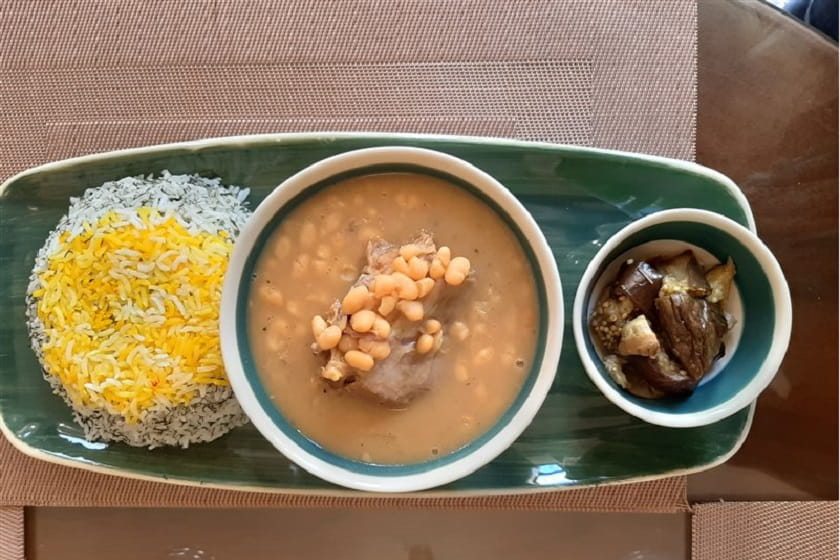 Khoresh-e Fesenjan, is a stew from Iran’s north. It is believed to originate from the Guilan region near the Caspian Sea, mainly the city of Rasht. The people of this city are deeply interested in sour Fesenjan and cook it at weddings and mourning ceremonies. This stew is prepared with meat, walnuts and sour pomegranate paste and its color is dark black when ready to be served. 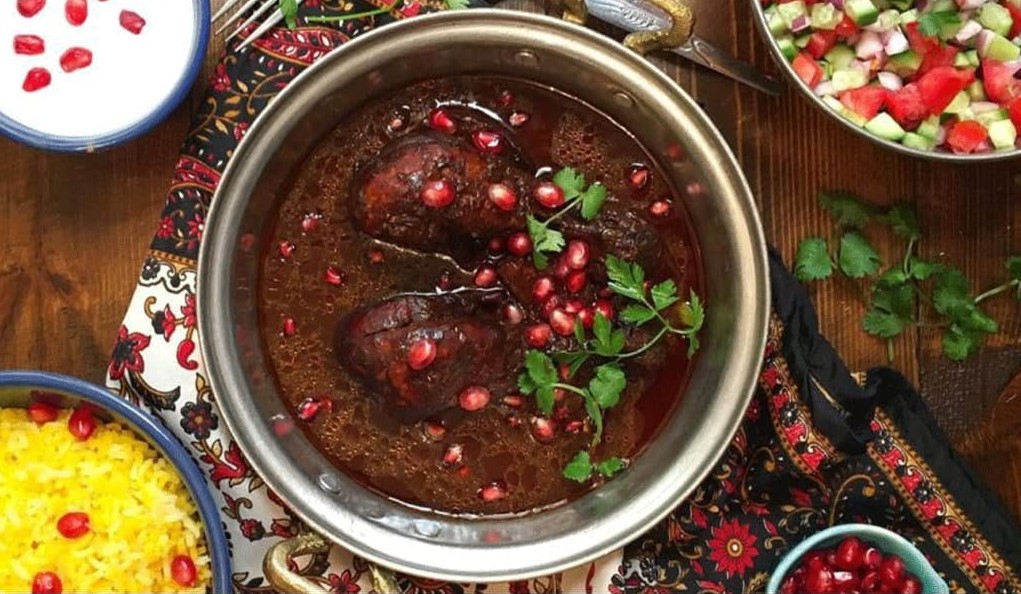 The special votive food of this northern city is a dish called minced meat Qeimeh. The only difference from ordinary Qeimeh is the deeply fried minced meat used in it. 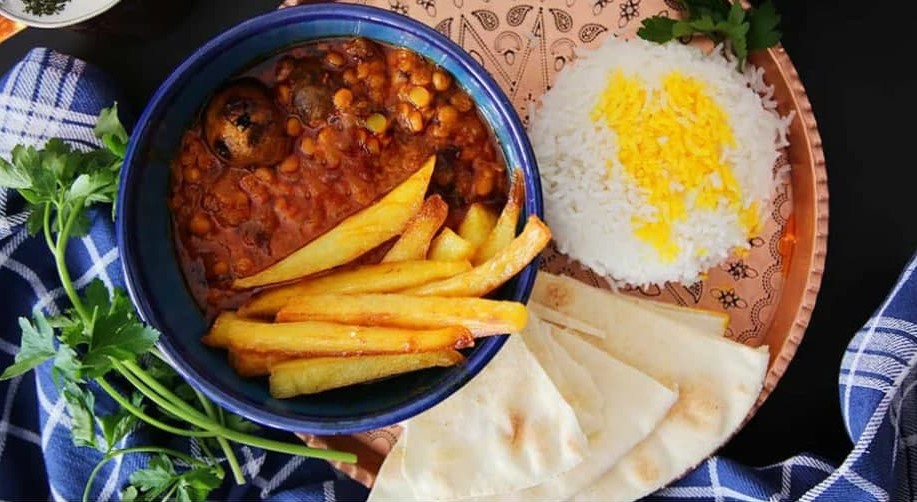 This food is very similar to Qeimeh stew, with the difference that the sour plums native to Semnan in central Iran are added to it. The stew along with rice is distributed among the mourners. 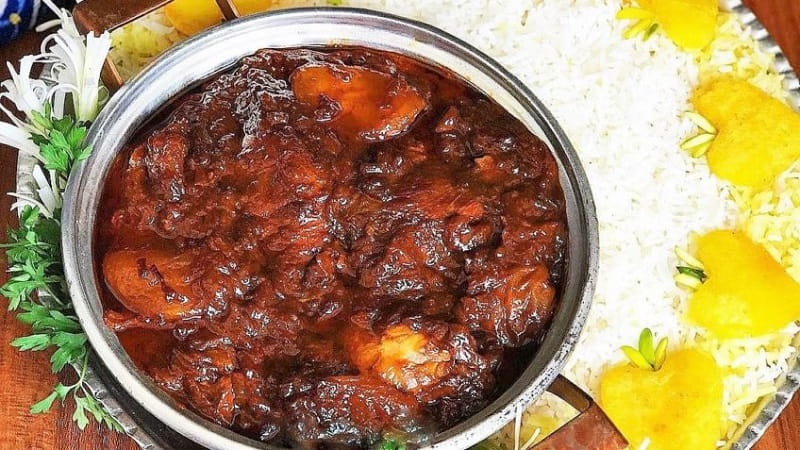 Bibi Seshanbe, which literally means “The Queen of Tuesday,” refers to a Persian mystical figure, considered as a holy angel who can save and cure poor and desperate people when called upon. This dish is offered as a votive food all year round, but it is also one of the first choices of the Arakis in the month of Muharram. Some say as it is distributed on Tuesdays, the potage is known by this name. The ingredients are peas, beans, lentils and bulgur. Meanwhile, like Halim, it is offered in the morning to the mourners. 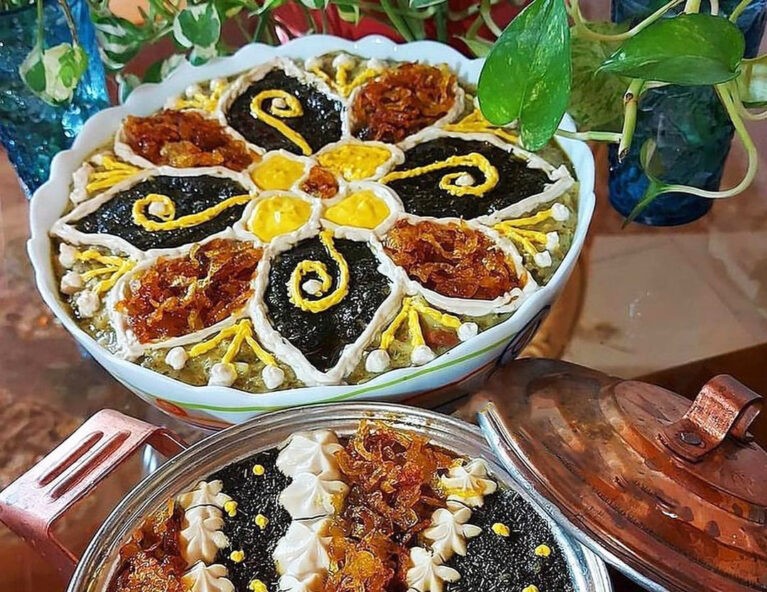 Biryani is one of the traditional dishes of Isfahan, in central Iran. It is a fried meat served on a piece of bread with onion and greens on the side. The ingredients are mutton, sheep lungs, tail fat, onions, cinnamon, saffron, walnuts, pistachio and almonds. 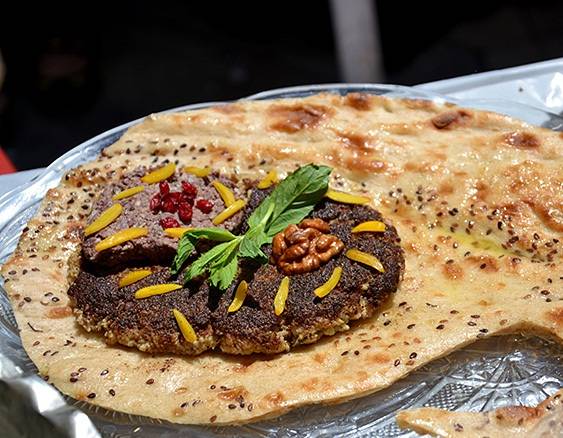 This dish is very similar to Halim. The ingredients are chickpeas, beans, mung bean, wheat and of course meat. It is flavoured with onions and a lot of tail fat. It is a kind of thick soup that has different names in the cities of Yazd province, such as Ash-e Halim, Jah Jah, Shab Esfandi, and Ash-e Imam Hussein. Besides, cooking this typical food has a special ceremony and there are some cooking styles for preparing it. The dish is finally garnished with fried garlic, onion, mint and Kashk or dried yogurt. 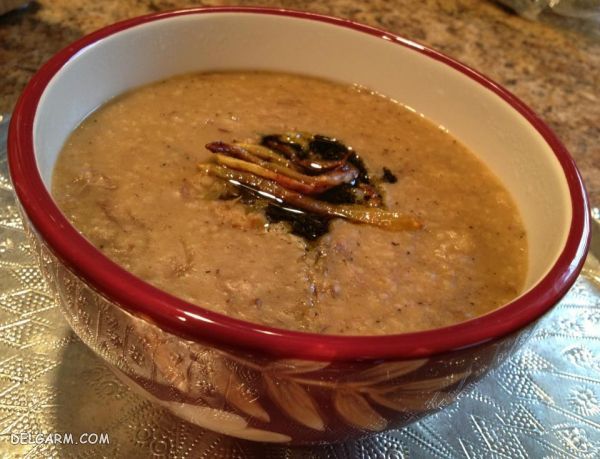 This broth has a sour and sweet taste. The ingredients are very diverse, from apricot leaves to dates, pieces of fruit and fenugreek. It is originally from Rafsanjan and very popular in Kerman province. The dish is also very popular on the days of Tasua and Ashura, therefore, many call it Imam Hossein’s broth too. 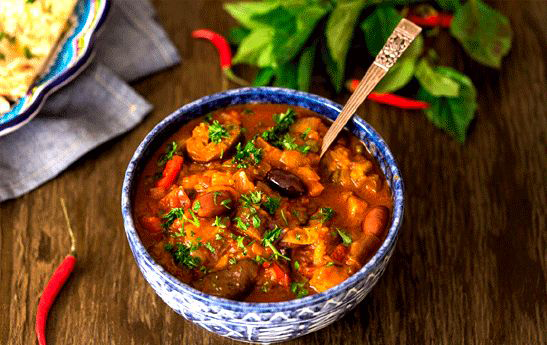 This food is from Khoy in West Azarbaijan province, northwestern Iran. The soup is almost thick. It is made of chickpeas, wheat cooked in milk and very little water. The potage is poured into a dish, and then a layer of roasted raisins and chopped walnuts are added to it. 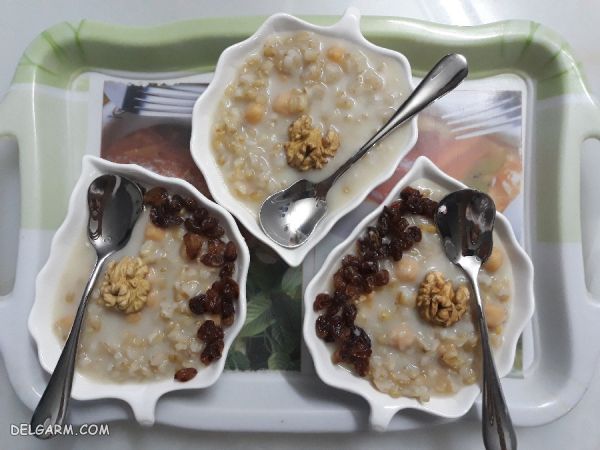 In this stew served during Muharram, people of Dezful in the south use ordinary peas instead of split peas. They believe that it is much better to prepare Qeimeh with peas because they soak and peel them, so the food is not flatulent and tastes better. 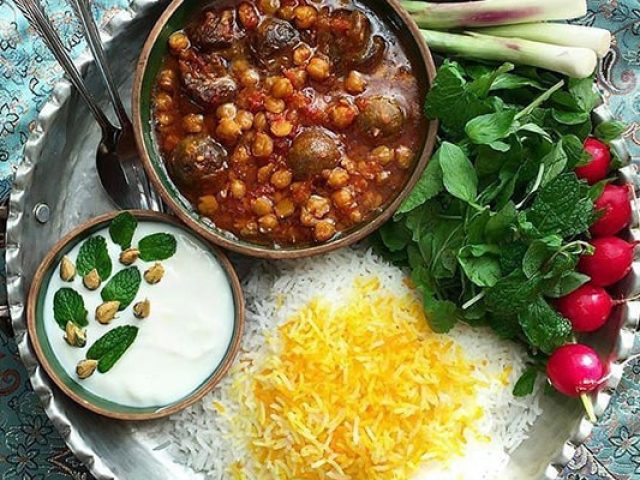 On the day of Ashura, People in the southern city of Ahwaz in Khuzestan province prepare a stew called vegetable stew to offer. This dish is made with very fried vegetables and white beans. It is a bit like Ghormeh Sabzi, the famous Iranian dish. 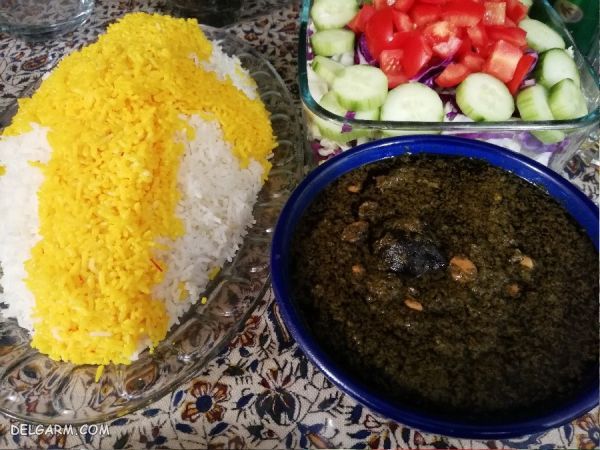