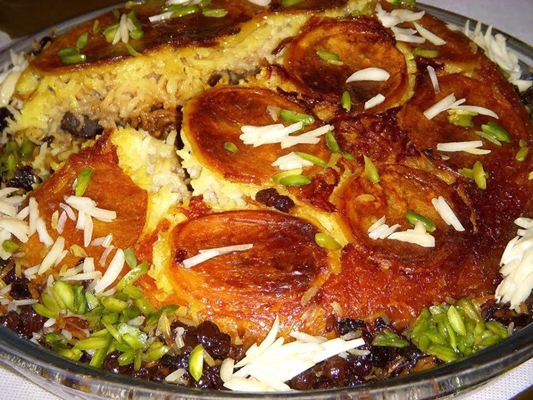 Garmsari Meat Tahchin is one of the traditional but luxury Iranian foods most popular in central parts of the country.

Garmsari meat Tahchin is one of the local foods of the Iranian Semnan province.

Generally, meat and rice is one of the oldest luxury foods of central regions in Iran. It is a fatty and high-calorie food, which is expensive, too.

People of Garmsar city in Semnan province also call meat and rice “Tahchin.” It is also commonly cooked as Nazri, the free takeaway food cooked on religious occasions and distributed among people.

Tahchin is also served for dinner in wedding ceremonies.

Prunes (if you like): 200gr, or 1 spoonful of verjuice powder

Salt and pepper: as much as necessary

Shredded pistachios and almonds for decoration

Butter (if you like to put it on the rice): 1 spoonful

Fill a casserole with water. After it begins to boil, add salt. Remove water from the rice and add it to the boiling water until rice is half-cooked. It takes less time to half-cook rice than to cook it. Then sieve the rice to remove water.

Put two spoonfuls of oil in a casserole, put sliced potatoes on the bottom of the casserole and add salt and saffron to them. Place chopped meat on the rice, put prunes onto the meat and then sprinkle spices onto them. Also add some saffron syrup. Then add the rest of the rice on other ingredients and keep going till the ingredients take a conical shape. (The rice will get dry at the edge as the cooking time is rather long).

Then put the casserole on mild heat and add one cupful of boiling water. Let the rice boil and steam for 5 minutes. Then turn down the heat very low. Afterwards, add sauté sultanas to the rice. Then add some saffron syrup and put the lid on and leave the rice to stay for 4 to 5 hours, so that the meat will be cooked through.

Put a spoonful of oil in a small frying pan. Sauté almonds, which you have already soaked in water. In a corner of the pan, only sauté washed shredded pistachios.

After it is cooked for 4 to 5 hours, pour melted butter onto rice, if you like. Take sultanas and empty the rice onto another dish and decorate it with sultanas as well as shredded almonds and pistachios.