Iranians Hold Rallies in Support for Palestinian Cause on Quds Day 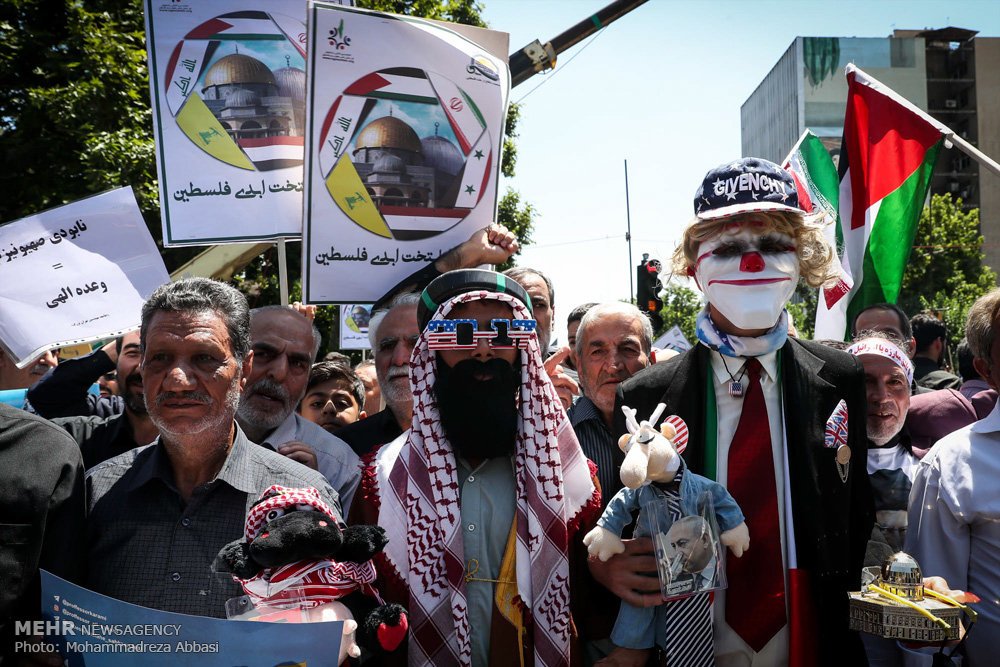 A Large number of fasting Iranians held anti-Israel rallies in the capital Tehran and nearly 900 other Iranian cities under the blazing summer sun on Friday, in a display of solidarity with the oppressed people of Palestine.

Marking the international al-Quds Day, the marchers, chanting “death to Israel”, called for an end to the seven-decade Israeli occupation of Palestine, which has been enabled by the widespread support of western countries.

Quds Day falls on the last Friday of the Muslim holy month of Ramadan, during which millions of demonstrators around the world expressed their protest against the occupying regime.

The day was named by the late founder of the Islamic Republic of Iran, Imam Khomeini, back in 1979, following the Iranian Islamic Revolution.

In a final statement released at the end of their rally, the demonstrators in Tehran said the dream of Palestine liberation has grown popular worldwide and the Zionist regime has failed in realizing its goal of controlling areas neighbouring the usurper regime.

However, the Israeli regime and its backers are carrying out new plots, working to consolidate their control over Jerusalem al-Quds by introducing it as their capital and mend ties with Arab states, the statement said.

It stressed Iranian people see the Palestine conflict as the top issue of the Muslim world and will never cease their efforts to put an end to sufferings of millions of Palestinians.

The statement urged Muslim countries to join hands to champion the Palestinian cause, saying they should stand against efforts aimed at normalization of ties between the regime and some Arab countries.

Iran says its support for the Palestinians’ fight against the Israeli regime is the reason behind hostile policies of the US and its western allies against the country since the 1979 revolution.

Parliament Speaker Ali Larijani said recent developments have proven resistance is the only option for Palestinians to restore their rights, which raises hopes they can eventually stop the decades-long occupation of Palestine.

Pointing to the so-called “deal of the century” put forward by US President Donald Trump, Larijani said the plan is doomed to failure, according to a report by Fars News Agency.

Larijani said Washington seeks to push Palestinians to forget about their rights, including their right to return to their lands, in return for receiving money.

“They think the Palestinian people are simple-minded. But the Palestinians in the past 70 years have been fighting not for money but for their honour,” he said.

Speaking in an address to Iranians observing Friday prayers in Tehran, Larijani said
“The plan, which aims to exchange patriotism with money, will be shelved sooner than [previous peace] plans,” he said.

The plan recognizes Jerusalem-Al Quds as the capital of Israel and says Palestinians can develop their own capital from villages and neighbourhoods around the city.

It also keeps Palestinian security and borders in the hands of Israel and leaves the settlements and the final borders to future negotiations.

Judiciary Chief Sadeq Amoli Larijani told reporters on the sidelines of the rallies in Tehran the strong presence of people in the rallies helps disrupt plots hatched by the US and Israel.

“The glorious presence of the people puts on display the might and unity of the Muslim ummah. The US and their client states cannot do a damn until people have such presence,” ISNA quoted him as saying.

First Vice-President Es’haq Jahangiri told reporters the rallies drew more people to streets this year, due to recent “strange” moves by the US that heightened tensions in Palestine.

“This year, the US president took a strange step and relocated the US embassy to Jerusalem al-Quds, which I believe hurt feelings of Muslims and prompted them to have stronger participation in this event,” he said, according to a report by Al-Alam.

Tension has mounted in the Palestinian territories since last December, when Trump announced a decision to recognize Jerusalem-Al Quds as the Israeli regime’s capital.

Since March 30, at least 118 Palestinians demanding their right to return to their lands have been killed and thousands more injured by Israeli army gunfire near the Gaza-Israel border fence.
The new building of the US embassy in Jerusalem-Al Quds was inaugurated on May 14.