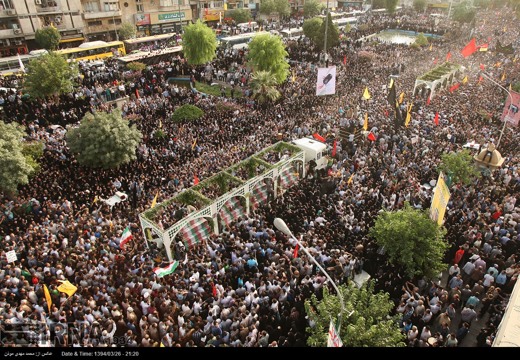 Thousands of people have held a massive funeral procession in the Iranian capital, Tehran, to pay homage to 270 martyrs, whose bodies were recently recovered some 30 years after the end of the Iran-Iraq war.

A large number of people took part in the procession around Baharestan Square in downtown Tehran to pay respect to the martyrs, whose coffins were carried draped in Iran’s national flags.

A total of 175 of the bodies belonged to a group of military divers that returned home on May 18. 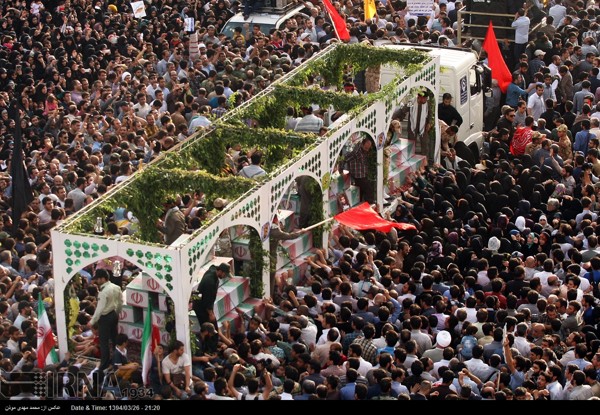 Some of the retrieved bodies had their hands tied and bore no scars, indicating that the martyrs were buried alive by the forces of the former Iraqi Ba’ath regime during Operation Karbala-4, said the commander of the Missing in Action (MIA) Search Committee of the Iranian Armed Forces, Brigadier General Mohammad Baqerzadeh.

According to Baqerzadeh, the bodies were brought into Iran via Shalamcheh border crossing in the southwestern province of Khouzestan.

The images of the bodies that were earlier released triggered a wave of sorrow and sympathy among Iranians from all walks of life.

Operation Karbala-4 was launched under the cover of darkness in late December 1986, and was meant to give Iranian forces a foothold along the Arvand Roud waterway. The Iranian troops would go on the offensive once across the waterway, and move onto the Iraqi port city of Basra. However, the operation did not go as planned.

About 34 years ago, former Iraqi dictator Saddam Hussein, supported by major Western and regional states, launched a military invasion of Iran. It came less than two years after the Islamic Revolution.

A large number of volunteers joined the Iranian armed forces to defend their country against the Iraqi aggressor under the leadership of the late founder of the Islamic Republic, Imam Khomeini.

The imposed war is commemorated in Iran every year as the eight years of Sacred Defense. Each year, Iranian Armed Forces stage nationwide military parades to mark the war’s anniversary.