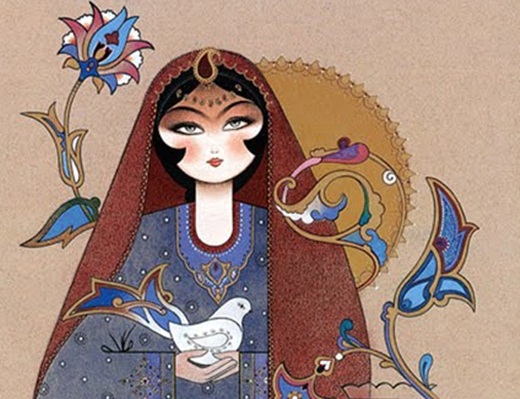 Sharq daily in an opinion piece analyzes the history and future of Iranian women, saying that the modern world has to live with gender equality.

“In the future the world has to live with the equality of men and women’s rights, irrespective of their ethnicity, nationality and gender. In its march toward perfection, the world has to treat both men and women as equals. This seems to be a sign of hope for humans who seek to make spiritual progress. The man, who has missed his missing half over the course of history, now needs that half as he walks down the path of perfection. This way he can reveal and restore the integrity of his values.”

Sharq daily on March 8 [marking the International Women’s Day] published an opinion piece on Iranian women by Mrs. Iran Darroudi, a contemporary Iranian artist whose works consist of surreal paintings with Iranian-themed imagery and strong lighting.What you read above are a few lines of her book, The Distance between Two Points. The following is a partial translation of the piece:

Primary tribes in Iran used to respect women as powerful and highly esteemed individuals so much so that women were admired as worship-worthy creatures. Back then the deities were all feminine, chief among them: Mitra, the goddess of Sun which was also the embodiment of light on planet earth; and Anahita, the best ancient goddess and the symbol of giving life. The literal meaning of Anahita is pure and immaculate. That’s why up until the latter-day centuries, women had been revered as valuable creatures in the culture and creed of our land.

Ancient Iranians believed in mother goddess and this helped elevate women to the level of divinity. They would argue that like a creator women have the power to give life to the creatures they give birth to. They are also capable of terminating the lives of those creatures by withdrawing their support, they said.

In the distant past, Iranians celebrated the fifth of Esfand, Sepandarmaz – which falls on 29th of Bahman in the current Iranian calendar – as women’s day. Sepandarmaz is the goddess of earth, and in mythological beliefs earth was feminine.

Earth – which is the place where plants, humans and animals grow – acts like the mother of existence which, in its expanse, paves the way for the emergence of creatures. That is one reason why the day of Sepandarmaz had been designated as women’s day, an occasion which was also marked as the day of love and a day in which women were the absolute rulers.

I wish Iranian women had learned more about the history of our ancestors and about the fact that our ancestors, living several thousand years ago, had named a day after women. […]

I still believe that Iranian women – if they learn about what has happened to them over centuries – will at one point in history return to their glorious past, and alongside men they will contribute to efforts to build a developed Iran in the capacity of mothers, holding different social positions.

Here are some sentences from my book, The Distance between Two Points: In today’s male-dominated world where women account for more than half of the population on earth, men have domination over women and trample upon their social and even human rights under different pretexts.

We should not forget that God has said in the holy Koran that He will not forgive two groups of people: those who do injustice and those who are denied justice and live with injustice.