Iranians will support their diplomats on nuclear front: Top guard 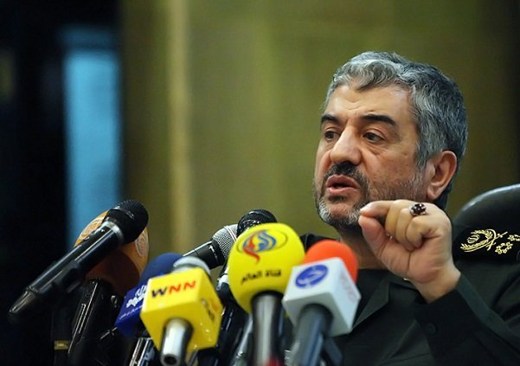 Major General Mohammad Ali Jafari said the Foreign Ministry is expected to fully tap into its potential to maintain the dignity of the Iranian nation.

The resistance of our noble people should be credited for the historic admission by the US president that military option and continued sanctions will only make Iranians stronger and more determined, Commander of the Islamic Revolution Guard Corps (IRGC) Major General Mohammad Ali Jafari said Tuesday on the sidelines of a meeting of top IRGC commanders.

According to IRNA, the top general went on to say that on the diplomatic front the children of the revolution have been able to deservingly stand up for the rights of the Iranian nation. “The Islamic Revolution Guard Corps thanks the diplomacy machine for its sincere efforts and for its insistence on the red lines of the establishment.”

General Jafari further said American failure in the past to honor its commitments makes the road ahead for this diplomatic jihad more difficult. “But, we are certain, as the esteemed president and foreign minister and members of the negotiating team have said the right to enrich uranium and maintain nuclear research and development and have all relevant sanctions lifted are the central demands of the Iranian people.”

In conclusion, he said the Foreign Ministry is expected to fully tap into its potential to maintain the dignity of the country and have the sanctions lifted all at once. “In light of the idea of harmony and unanimity between the public and government, the Iranian people will support the diplomatic front as far as the nuclear issue is concerned and won’t allow the misleading interpretations of the [Lausanne] statement, particularly by the Americans, to dent the existing trust between them and their government.”