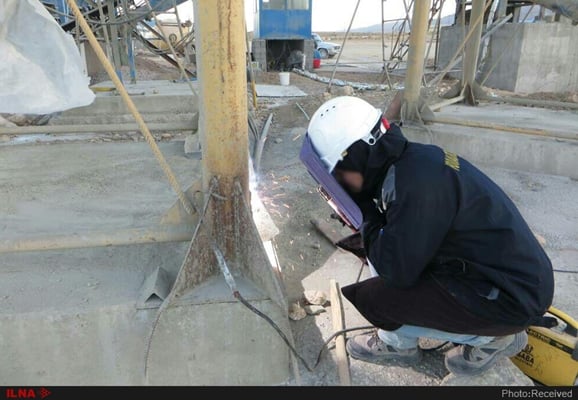 In life, failures come easy, and success is hard won. However, the drive to work hard makes even the impossible possible. Such is the story of a young woman who made significant strides to realise her ambition of becoming a welder and eventually succeeded.

La’ya, a 34-year-old woman born in Shiraz in southern Iranian province of Fars, is the only female welder in a massive industrial site somewhere in Iran.

In a recent interview with the Iranian Labour News Agency (ILNA), she has shared the story of the hardships she faced before reaching her current position, encouraging other Iranian women with her success story.

Years ago, when La’ya was a high school student, her parents got separated after her father became flat broke.

Due to the financial situation of her family, La’ya had no choice but to abandon the dream of studying in a university and rather try to get a job.

“At that time, I used to make leather bags and wallets and sell them,” she said.

But she didn’t want to give up her education. Three years later, La’ya decided not let her family’s financial difficulties deter her path to receiving a degree.

“I took the university entrance exam. I was accepted into a university in Mashhad to study tourism and a university in our city to study architecture. I was stuck between two choices, whether to follow my passion or stay with a family who needed me,” she said.

Upon her mother’s request, La’ya decided to stay in Shiraz and study architecture.

In the final years of university, her father was diagnosed with cancer. Moreover, her father’s financial difficulties had intensified and his creditors sued him.

“I could not attend my classes. I had to study, attend court sessions, work and look after my father in the hospital,” she said. However, despite all difficulties, La’ya managed to become the top student at that semester.

After a few while, her father passed away. La’ya was then in charge of herself. She needed a full-time job to run the family, as she earned small income by making leather bags.

She became aware that the Technical and Vocational Training Organization holds welding workshops and top trainees could land themselves a job.

La’ya attended the workshop. She had so much fire in herself that managed to beat her male rivals and become a top trainee, setting her life on its current trajectory.

“One thing I was sure of was that I would become a top trainee, come what may,” she said.

At the end of the course, she was sent to an oil site in a small city in oil-rich regions of southern Iran.

La’ya started working as a welder and advanced her career well.

Everything was going well for La’ya until people in the small city started objecting her presence over fears she could be corrupt.

“People gathered in front of my workplace. They wanted me to go. That was a small city and I was the only female welder among so many men. People were angry. They didn’t want me to be there. I was afraid what would happen if I lose my job,” she said.

However, La’ya decided to resist and fight for her job. She says the only reason that saved her from being fired was her quality work and the support of chief executives of the company she was working for.

“I had not reached that position so easily. I chose to stay for as long as they tolerate me,” she said. After a few months, people got used to her and the problem was solved.

Despite her good work, La’ya still faces difficulties in her workplace because she is a single woman.

She says people around her have sometimes tried to sexually harass her.

“At my workplace, I have been under pressure. People have given me annoying offers,” she said.

“Throughout my life, I have faced attempts for sexual harassment and I have resisted them by expressing objection. But here, it is so difficult,” she said.

Despite all the hardships, La’ya does not intend to cave into pressure.

“I won’t be stopped. Today, I’m a senior welder in a big industrial site. I receive good income and stand on my own feet,” she said.