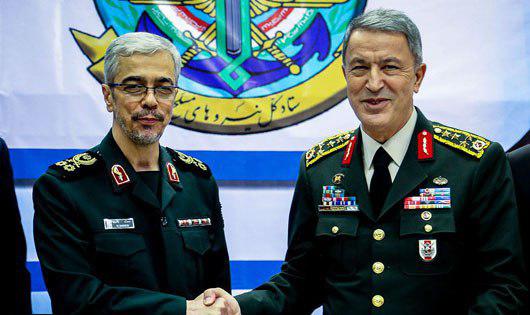 General Hulusi Akar, the highest military officer of Turkey, and Major General Mohammad Baqeri, the Chief of Staff of the Iranian Armed Forces, have talked about the ongoing Turkish operation in Syria’s Afrin.

In a telephone conversation on Sunday, Akar briefed his Iranian counterpart on the latest developments in the region, saying the main reason for the launch of the bombing and artillery attacks on Afrin was the gathering of terrorist groups in the region.

The Turkish Army’s operation is aimed at foiling the threats of these groups against the villages and towns of Turkey, he added.

Akar went on to say that these attacks were carried out by the Turkish army within the framework of the country’s right to self-defence.

He also assured his Iranian counterpart that Turkey would respect the territorial integrity of Syria and continue to adhere to the agreements reached in the tripartite negotiations with the Islamic Republic of Iran and Russia.

General Baqeri, for his part, stressed that territorial integrity, independence and sovereignty of Syria should not be undermined, and that Ankara should explicitly state that it has no aim of trespassing into the Syrian territory.

“Meanwhile, such actions should not lead to the abuse of the enemies of the Syrian people, and the enemies of the Muslim world, particularly the US and its allies in the region, should not find the opportunity to achieve their expansionist goals in Syria in such a situation,” added Baqeri.

He further noted that these military actions should not be detrimental to the tripartite political talks including the Astana Process that have been successful so far.

The Iranian top commander also highlighted the necessity of preventing possible damages to the people of the Syrian villages and towns, and stressed that this must be considered in the regions where the ​​operation is being carried out.

Turkey said on Sunday that it had begun a ground incursion into Afrin a day after intense aerial bombardment that signaled the opening of hostilities in a new phase of Ankara’s involvement in the war across the border.

The launch of the ground campaign by the Turkish military on Sunday, alongside Syrian rebel factions under Ankara’s tutelage, came on the second day of a military offensive called “Operation Olive Branch” by the Turkish government, with dozens of airstrikes hitting more than 150 targets in the Kurdish-dominated district from late on Saturday afternoon.