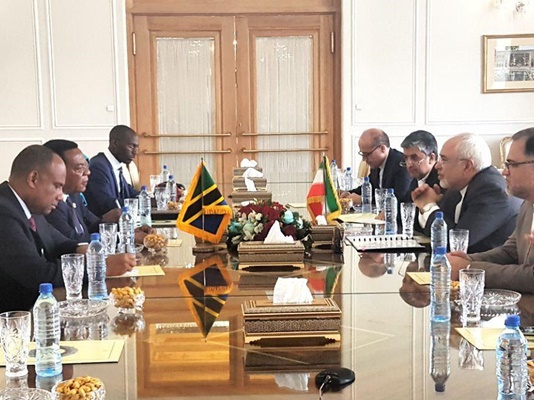 Iranian Foreign Minister Mohammad Javad Zarif and his counterpart from Tanzania Augustine Mahiga have discussed issues of mutual interest in a meeting in Tehran.

During the Wednesday talks, Zarif underlined Iran’s resolve to expand its relations with African countries, saying Tehran is ready to develop and deepen its cooperation with Tanzania in various political and economic fields.

He further referred to banking and consular relations, tourism, science and technology, water, and power as the fields with highest priority for Tehran-Dodoma mutual cooperation.

Zarif also voiced the preparedness of Iran’s public and private sectors to enhance their relations with relevant sectors in Tanzania.

Mahiga, for his part, praised Iran’s role and position in various political, economic, scientific, and cultural fields, and called for further development of ties with the Islamic Republic.

Elsewhere in the talks, the two sides also agreed that Iran-Tanzania Joint Economic Commission holds its meeting as soon as possible.

International and regional issues as well as Iran-Tanzania cooperation in international bodies and organizations were among other issues discussed by the two top diplomats.