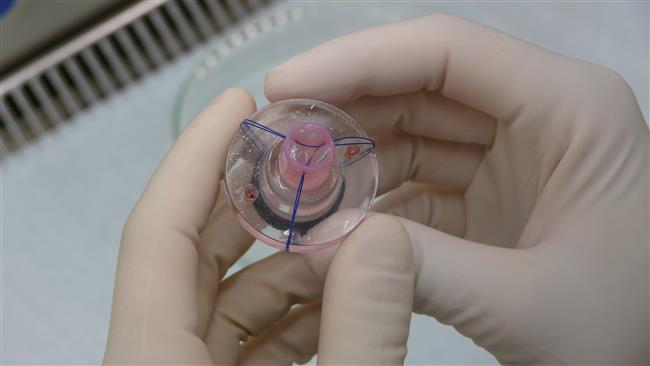 Two Iranian scientists have used a metal alloy to successfully develop the first hybrid tissue-engineered heart valve, which can replace the current valves thanks to its durability.

Two Iranian scientists have successfully created the first hybrid tissue-engineered heart valve with the use of a metal alloy.

Hamed Alavi, PhD, and Arash Kheradvar, MD, PhD, from the University of California in Irvine, developed the new valve, which can become a replacement for current valves thanks to its durability, the Mehr news agency reported on Monday.

The findings of their research were published in an article in the latest edition of the Annals of Thoracic Surgery.

In the current technology used in valve replacement, the patient’s cells are used to create an artificial valve set on a scaffold that will eventually degrade, resulting in the failure of the valve.

The scientists believe by using the new technology, patient’s life quality will be improved as the valve eventually incorporates itself into the patient’s heart structure.

The valve is built on a “non-degradable scaffold that stays within the valve to provide the support it needs without interfering with its normal function,” said Kheradvar.

“The valve we created uses an ultra-flexible scaffold made of an alloy of nickel and titanium (nitinol) that is enclosed within the patient’s own cultured tissue,” he added.

According to the team, initial lab tests on the valve have been completed and the next phase of testing is set to begin.