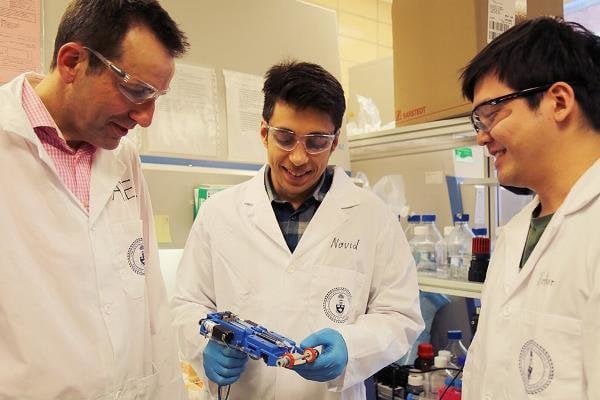 An Iranian scientist and his team have developed a 3-D printer used to produce skin in order to heal wounds.

The printer was made by an Iranian PhD student at the University of Toronto in cooperation with a team of researchers he was leading.

The hand-held apparatus can directly print skin on deep wounds, a report by the Persian-language Mehr News Agency said.

The gadget is similar to the device producing glue. But instead of glue, the printer rolls out layers of alginate (a kind of brown algae). Under each layer are rows of natural ink containing bio-materials such as skin cells and collagen. These materials along with fibrin (a protein instrumental in healing wounds) are the most frequently found components in the skin.

The printer weighs less than one kilogram and is very easy to use. This device makes redundant the process of washing and incubation (which are done in ordinary printers) and covers the wound with skin in one or two minutes. The method has been tested on mice and pigs, so far.

The researchers say the printer is able to produce skin tissue for special patients and in accordance with the type of their wounds.

The same team of researchers had, four years ago, developed a 3-D printer as big as a microwave oven that was able to print layers of skin to heal burns. The new device is seen as an improvement on their previous achievement.