Iranian reformists call for international opportunities to be seized 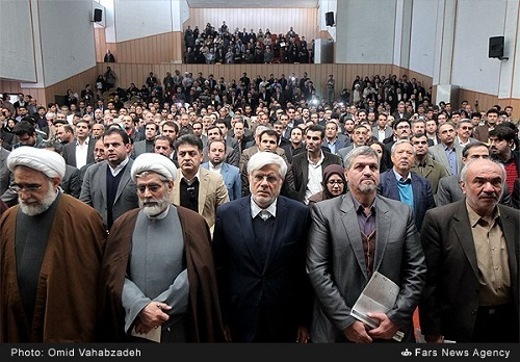 Reformists hold a gathering for the first time in six years, describing unity and public trust as pillars of the country's national security.

Reformists from different parties and institutions got together in Tehran on Thursday. The get-together, a first in six years after the previous meeting was not allowed to convene under President Ahmadinejad, dominated the front pages of reformist-leaning dailies on Saturday. “The return of reforms”, “Holy alliance of moderation and reformism” and “Reformist flag flies on Parcham Street,” were some of the banner headlines they put on their covers. The following is a partial translation of a statement participants issued at the close of the meeting as reported by the Iranian Labor News Agency (ILNA):

1. We announce to the world that we view unity and public trust as the pillars of our national security. Based on an edict by the Supreme Leader [which bans the production and use of nuclear weapons], we reject any resort to atomic weaponry. We are the flag-bearers and advocates of dialog among civilizations and a violence-free world.

To that end, we strongly decry any act of terror or violence as contradictory to the compassionate mission and principles championed by all prophets, particularly that of the Muslim Prophet. Also, we denounce contradictory behaviors and measures which give rise to the emergence of extremist and violent currents.

2. Now that thanks to public vote and the approach of the Government of Hope and Prudence, valuable and trust-building steps have been taken toward the settlement of the nuclear dispute, and the three branches of government are unanimous in their support for such efforts, we are of the opinion that the world powers should seize every opportunity to get the dispute settled.

Iran’s peaceful nation has been closely monitoring the process and the saboteurs at home and those who miss out on opportunities abroad should make sure the consequences of their actions won’t come back to haunt them later.

Among other things, the statement underlined the following:

1. Recognition of the rightful and legal rights of all ethnicities, followers of divine faiths and religions as well as different political and intellectual views.

3. The need to set the stage for encouraging the highest turnout in the upcoming parliamentary elections, scuttling the methods which restrict the public right to choose and ensuring a fair, legal and competitive race.

5. Eradication by the government and the judiciary of the main culprits of corruption and monopolies which spark off crises.

6. Respect for the legitimate rights of women.