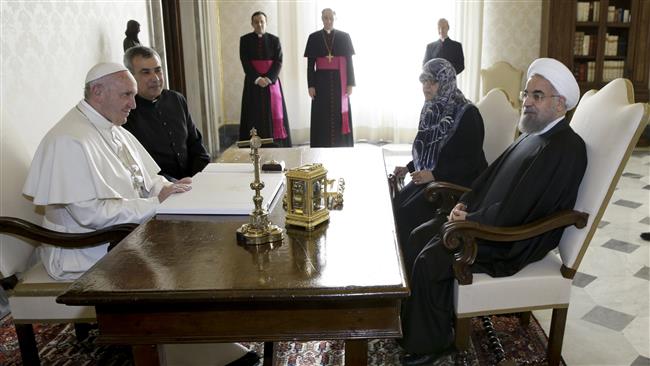 Iranian President Hassan Rouhani holds a meeting with Pope Francis at the Vatican as part of a three-leg European tour.

The meeting was held behind closed doors on Tuesday on the second day of Rouhani’s trip which has already taken him to the Italian capital Rome.

During the 40-minute meeting, the two sides brought about common spiritual values and highlighted the good state of relations between the Holy See and Iran.

They also discussed measures to be undertaken by the nuncio for promoting the dignity of human being and religious freedom in Iran.

The pontiff called on Iran and other regional countries to find political solutions to ongoing problems in the Middle East and to combat the spread of terrorism and arms supply to terrorist groups operating in the region.

Rouhani and the Pope highlighted the importance of interreligious dialogue and the responsibility of religious communities in promoting reconciliation, tolerance and peace.

Rouhani also presented the pontiff with a handwoven Persian carpet along with a book of illustrations by renowned Iranian painter Mahmoud Farshchian.

According to Iran’s presidential office, Rouhani and the Pope said divine religions promote peace and shun violence and extremism. They called on world nations to make comprehensive efforts to establish global peace.

Also on Tuesday, the Iranian president held a meeting with the Vatican prime minister and discussed the latest regional and international developments.

The prefect of the papal household bishop Georg Gaenswein welcomed Rouhani upon his arrival.

The meeting between the Pope and President Rouhani is the first of its kind since 1999 when Pope St. John Paul II met the then Iranian President Mohammad Khatami at the Vatican.

Rouhani arrived in Rome on Monday at the head of a delegation of more than 100 businessmen and ministers on the first leg of his trip to three European destinations after Iran and the P5+1 group of countries started on January 16 to implement a nuclear agreement, dubbed the Joint Comprehensive Plan of Action (JCPOA), they reached in Vienna last July.

During his stay in Rome, the Iranian president held talks with Italian Prime Minister Matteo Renzi and his Italian counterpart Sergio Mattarella. He also addressed an Iran-Italy business forum.

The contracts, worth up to 17 billion euros (USD 18.4 billion), were signed in a ceremony attended by the Iranian president and the Italian prime minister in Rome.

Rouhani will set off for Paris on Wednesday to hold talks with senior French officials.