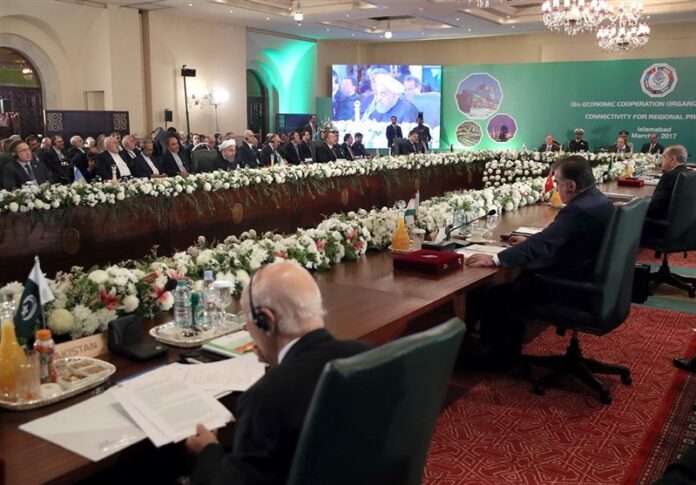 Iranian President Hassan Rouhani said the Economic Cooperation Organization (ECO) should play a crucial role in building the future economy of the region.

“The ECO can and should play a prominent role in building the future economy of our region,” President Rouhani said while addressing the ongoing 13th Meeting of the Economic Cooperation Organization (ECO) heads of state in Islamabad.

The two-day meeting kicked off in the Pakistani capital on Wednesday.

The Economic Cooperation Organization was founded by Iran, Pakistan, and Turkey back in 1985. It also groups Afghanistan, Azerbaijan, Kazakhstan, Kyrgyzstan, Tajikistan, Turkmenistan, and Uzbekistan.

Following is the full text of Rouhani’s speech:

In the Name God, the Most Compassionate, the Most Merciful

Your Excellency Mr. Nawaz Sharif, the Honorable Prime Minister of the Islamic Republic of Pakistan

Honorable Heads of State and Government

It is a great pleasure to participate in the 13th Summit Meeting of the ECO Member States in the brotherly and friendly country, Pakistan. I deem it necessary to appreciate His Excellency Prime Minister Sharif for the warm hospitality of the Pakistani government and the proper organization of this august gathering.  Also, I would like to thank the Republic of Azerbaijan for its positive contributions to the Economic Cooperation Organization during its chairmanship. I am confident that with synergy and exchange of views in this summit and more understanding among the heads of Member States,  we would be able to take longer strides in advancing the programs and activities of an organization.

Our continent Asia is going to pump the heart of the world’s economy as of the second half of the present century. The emerging Asian economies would change the direction of the world’s economy from the West to the East; and this would turn to the 21st to the era of rising Asia. Economic estimates indicate that with the improvement of the economic status of some of the most effective ECO Member States in the following decade, our organization would once again prosper in Asia as the key to engagement between the East and the West in the future, a future which begins right from today and would demonstrate to the whole world that not only the ECO has not lost its philosophy of existence, but also it would exert considerable influence on the future of important region.

The unique status of our countries in transit and transport as well as energy and commerce has put the ECO in an ideal position. The ECO can and should play a prominent role in building the future economy of our region. For this to happen, the ECO is in need of restructuring, a restructuring  with a view towards the new realities and fresh opportunities.

Situated on the shores of several strategic waterways of the world and being neighbor to five important bodies of water, our countries have provided unique geopolitical and territorial conditions for our organization. There is no other trade and transit route linking Europe to Asia more cost-effective and shorter than the ECO pathway.

Our organization is also significant to the world in terms of the supply and transit of energy. In 2013, we decided to declare 2022 as the decade of ECO energy cooperation improvement and progress today we stand halfway through it. However, unfortunately, our intra-regional cooperation and trade in the energy sector remain low and it is necessary for us to utilize the capacity of the ECO for improving cooperation among the Member States for the further production and trade of energy in the future.

Mobilizing our facilities, we are able to encourage and accelerate more growth for our countries. The economic strengthening of the ECO is tied to the close link among our people. We should remove impediments over connection among our people so that they enjoy facilitated visits and cooperation. Our cultural commonalities are a precious asset for our economic integration.

We should overcome barriers of visa, tariffs, transit and transport, and investment so that we provide our private sector and economic activists with the opportunity to approach higher horizons. The message of this summit to the entrepreneurs of the ECO Members States should be higher horizons, more integrity, and closer bonds. Linking through roads, railways, electricity, communications, and telecommunications would provide us with the best of opportunities to enjoy common benefits for our economies.

Until security is in jeopardy, we would not be able to paint a brighter landscape for development and prosperity. Terrorism and Takfiri thoughts are now a common threat to all of us and it is necessary to establish more coordination and cooperation in confrontation with this vicious phenomenon. In Afghanistan, Iraq, Syria and Yemen, hundreds of thousands of lives have been lost and million displaced. The outcome of such pains ad sufferings is more vulnerability in our region to domestic conflicts and foreign intervention.

To overcome such problems, we should stop seeking hegemony, and cooperate instead in building a stronger region. I firmly believe that we can weather this crisis unharmed provided that we stop unnecessary and destructive rivalry and believe in our ability to resolve our own problems and mobilize our desire to return to our historical status, meaning the highway of civilization, culture and commerce. The Economic Cooperation Organization is a proper ground for building a safer region for our nations. In view of our collective security, others would confess to the capacities of this region and would even contribute to building prosperity of our countries.

The Islamic Republic of Iran, having long joint borders with the six ECO Member States, deeply honors joint interests and bonds with its neighbors. Not only do we see no obstacle in deepening our relations and cooperation with the ECO Member States, but also we are prepared to enter into a more extensive scope of cooperation with the other players. The successful experience of nuclear negotiations which were concluded within a win-win framework, has paved the way for taking a huge leap in regional cooperation with the ECO Member States with such a fruitful and hopeful approach. The end of the fabricated crisis over the peaceful nuclear activities of Iran and the accomplishment of such a significant international deal which has been ratifies by the Security Council of the United Nations are an impressive achievement not only for Iran and the ECO, but for the world over.

My government in this new climate welcomes the expansion of cooperation in transit and transport, especially the South-North transit route from Sarakhas to Bandar Abbas and Inchebroon to Chabahar, finance and banking, science and technology, agriculture, and food security, culture and tourism and environment and the first flight against natural disasters. Having the world’s largest oil and gas reserves, extensive regional communication hub, young and educated human workforce, scientific capabilities, hit-tech sophistication, accelerated economic growth and employment, as well as economic stability, Iran stands ready as one of the founders of this Organization to play its role in consolidating connectivity among the Member states and empowering the ECO. Fortunately, our organization has founded many specialized institutes and agencies for the development of which the Islamic Republic of Iran has played an active role. Therefore, appropriate frameworks and mechanisms have been established in ECO to help realize these goals.

Honorable Heads of State and Government

The future of our region is determined with our decisions today and the prosperity tomorrow is tied to our connectivity today.

Let’s focus our attention on our commonalities and turn differences to strengths and dialogue and cooperation.

Let’s believe that our power resides with our connectivity.

May God bless you.