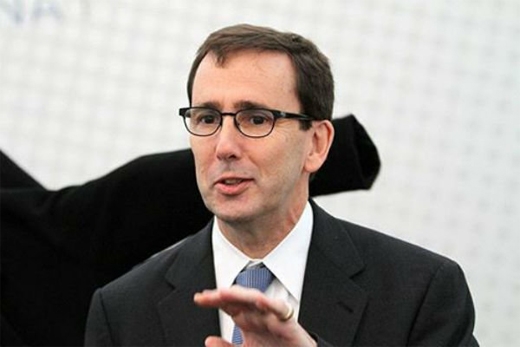 Alan Eyre, a US State Department spokesman, says any final deal should be satisfying to both sides and guarantee their interests.

Recent years have seen an American figure other than President, Secretary of State or other senior officials draw a lot of attention in Iranian media. The person in question is so fluent in Farsi that he uses Persian proverbs and colloquialism as handily as native Farsi speakers do.

You guessed it right. The following story is about Alan Eyre, a US State Department spokesman who has said the presence of new faces in nuclear talks between Iran and P5+1 is designed to help prime negotiators secure their stated goal. The following is an excerpt of what Mr. Eyre said in an interview with Mehr News Agency’s Abdolhamid Bayati:

The makeup of the team representing the US administration in the talks is not always the same. It keeps changing. For instance, in the latest round of talks Energy Secretary Ernest Moniz was on our team as the chief American expert. He was there to both facilitate technical talks with Iranian negotiators and offer technical advice to Secretary Kerry.

That our energy secretary was on hand for the talks means the negotiations are highly technical. We made progress in this latest round of talks, but there is more to cover before we reach our destination. As they say, you climb the ladder rung by rung.

When it comes to Iran, we have always coordinated with Israeli security and intelligence agencies even when leaders of the two countries are at odds, politically. At an expert level we see eye to eye over Iran’s nuclear program.

Generally, news stories and articles that appear in newspapers do not leave much impact on the way we do business. We want to keep the content of the talks under wraps.

In lifting the sanctions, we can act in keeping with the Joint Plan of Action [the Geneva deal] which says: ‘This comprehensive solution would involve a reciprocal, step-by step process, and would produce the comprehensive lifting of all UN Security Council sanctions, as well as multilateral and national sanctions related to Iran’s nuclear program.’

As far as I know there is no disagreement over the timetable. What is desirable is to secure a principal understanding by the end of March and strike a final deal by the end of June.

When it comes to Iran’s nuclear program, everyone knows that in our country there are differences as to what constitutes an optimal mechanism to deal with the case. But there is unity as far as the final goal is concerned: Iran should not develop nuclear bombs. As President Obama has said we want the case to be solved peacefully through diplomacy.

Let’s not forget the fact that we have made a lot of progress over the past year. The US administration hopes that Iran can prove its claims that in keeping with a religious edict it views nuclear bombs as religiously banned and that its nuclear program is peaceful so that we can strike a final deal.

In that final deal Iran should give assurances to the world that it will never develop a nuclear bomb and in parallel we lift the sanctions to help Iran’s economy come back into the fold.

Any possible deal should be satisfying to both sides; in other words it should guarantee the interests of both parties. A deal like that has been envisioned in the Joint Plan of Action.