Iranian nation proved it will never give in to pressure: Zarif 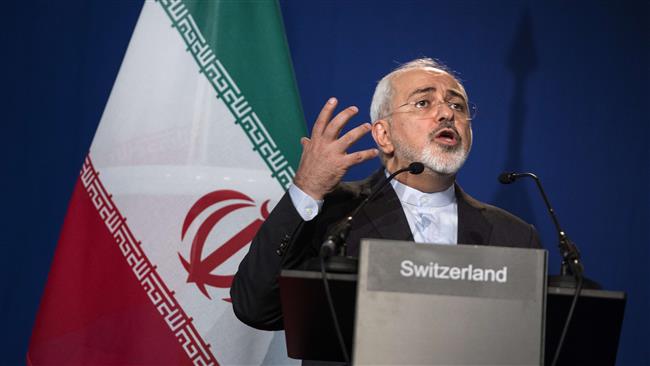 There has been positive reaction to a joint statement adopted by Iran and P5+1 at the close of marathon nuclear talks in Switzerland.

Iran’s Foreign Minister Mohammad Javad Zarif has praised the Iranian people for their resistance and steadfastness during the course of the negotiations over the Islamic Republic’s nuclear program, saying that such conduct proved that the Iranian nation will not compromise on their interests.

“Through resistance and steadfastness, the people of Iran conveyed that they will never bow to pressure. The people of Iran show resistance in the face of pressures. One more thing is that Iranian people proved, as stated by Leader of the Islamic Revolution (Ayatollah Seyyed Ali Khamenei), that they favor wisdom, negotiations, dialogue and constructive proposals,” Zarif told reporters following marathon talks in the Swiss city of Lausanne, where Iran and the P5+1 group of countries adopted a joint statement on Thursday night.

“They are great people, who are ready to scrutinize and watch out closely all the attitudes and how they are treated. So, those who have not left a good record behind can seize the chance to correct their past mistakes,” he added.

Zarif said the final agreement over Iran’s nuclear program will be based on the interests and requirements of the Iranian people, stressing that the United Nations Security Council will endorse such an accord into practice.

The top Iranian diplomat also criticized the West for its approach against Iran over the past years.

“Iran has been the victim of many, many broken promises in the past. We want to be sure that if promises are broken again, we will be safe, and our national interests will not be forgotten or compromised. That is why we have put an elaborate mechanism that will not allow excuses to simply lead to a reversal of the system, but provide the necessary confidence to all participants that they can continue with the implementation of the deal,” Zarif said.

He hailed the mutual understanding reached between Iran and the five permanent members of the UN Security Council plus Germany as “a major step forward.”

The Iranian foreign minister pointed out, “We have stopped a cycle that was not in the interests of anybody… I hope that at the end of this process, we will all show that through dialogue and engagement with dignity we can in fact resolve problems, open new horizons, and move forward.”

The top Iranian diplomat expressed hope that the final comprehensive deal over Iran’s nuclear program will be based on a win-win approach.

Addressing a press conference in Lausanne, EU foreign policy chief Federica Mogherini said, “Today, we have taken a decisive step, we have reached parameters” for a comprehensive deal between Iran and the P5+1.

“The political determination, the goodwill of all parties made it possible,” said Mogherini who is the EU’s high representative in the nuclear talks between Iran and the P5+1.

“This is a crucial decision laying the agreed basis for the final text of Joint Comprehensive Plan of Action. We can now start drafting the text and annexes,” she said.

UN Secretary General Ban Ki-moon welcomed the mutual nuclear understanding, saying it will pave the way for bolstering peace and stability in the Middle East.

“A comprehensive, negotiated solution to the Iranian nuclear issue will contribute to peace and stability in the region and enable all countries to cooperate urgently to deal with the many serious security challenges they face,” Ban said in a statement.

US President Barack Obama called the agreement a “historic understanding” that “meets our core objectives.”

US Secretary of State John Kerry also defended the deal, saying, “Simply demanding that Iran capitulate makes a nice sound bite, but it is not a policy, it is not a realistic plan.”

Calling the understanding reached a “solid foundation” for a future deal, he added that “many technical details” still must be ironed out.

German Chancellor Angela Merkel spoke with Obama about the agreement. Both leaders “hailed the results of the negotiations” with Iran, said her spokesman Christiane Wirtz.

Separately, German Foreign Minister Frank-Walter Steinmeier called the framework agreement a “big, decisive step forward,” which could “overcome obstacles that stood in the way of a deal for a decade.”

“If a final agreement is achieved, it could in my view not only pave the way for a solution to the Iran conflict, but it would be the first and only conflict in the Middle East where we will have achieved a de-escalation,” Steinmeier said in a statement.

The Russian Foreign Ministry also hailed the achievement of the understanding, saying it recognizes the Islamic Republic’s “unconditional right” to pursue its civilian nuclear program.

“This deal contains the principal put forward by Russian President Vladimir Putin, which is Iran’s unconditional right to a peaceful nuclear program,” the Russian ministry said in a statement.

French President Francois Hollande hailed the efforts made by the negotiators to reach the understanding.

“The president of the Republic… hails the work achieved by the foreign ministers and their commitment throughout the process as well as the bases of the accord that have been found,” Hollande’s office said in statement.

French Foreign Minister Laurent Fabius also welcomed the agreement as “positive,” saying “there is still work to do.”

“Now, possibly, we are at the start of a new process. We’re trying to proceed but we’re not yet at the end of the road,” Fabius told French television.

British Foreign Secretary Philip Hammond also welcomed the agreement, saying that it is “a good basis for what I believe could be a very good deal.”

He went on to say that the mutual understanding was “well beyond what many of us thought possible even 18 months ago,” adding that much work remained to be done.

“We have agreed the key parameters of a comprehensive deal on Iran’s nuclear program” after days of “extremely tough” talks, Hammond stated.

Jordan, which chairs the UN Security Council this month, called the announcement of the agreement “good news.”

“We hope it will open up other situations in our region,” said Jordan’s Ambassador to the UN Dina Kawar.