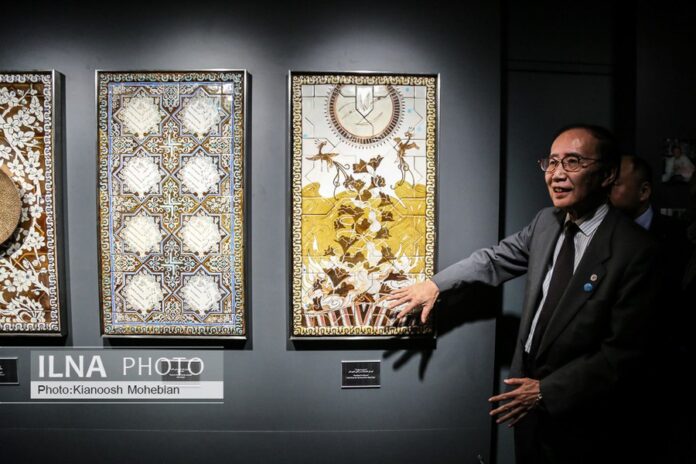 Three unique murals by Iranian and Japanese artists have been donated to a famous museum in Tehran named after Reza Abbasi, a prominent artist of the Safavid era.

The three artworks, created by Japanese master Kao and Iranian artists Aalieh Najafi and Atefeh Fazel, were unveiled in a recent ceremony in Tehran.

“We are now here to celebrate the 90th anniversary of the establishment of Iran-Japan relations,” said Mohammad Hassan Talebian, Deputy Director of the Country’s Cultural Heritage, during the ceremony.

The three pieces unveiled at the ceremony are tile murals created with a Seljuk period technique called Zarrinfam (golden glaze).

The Japanese artist said that the aim of creating the three ceramic wall paintings was to conduct a study.

“In 1966, my father revived the Zarrinfam pottery, and in 1975 he was recognized as the first person to revive this Iranian art and his wish was to return to his birthplace after the creation of his artwork.”

“More than ten Iranian artists have been invited to Japan to do research on Zarrinfam pottery, and we hope that holding this event in Iran will help to make this art more popular,” the Japanese professor said.

At the end of the ceremony, the three artworks were unveiled with the themes of Paradise, Imam Ali (AS) and Unity.