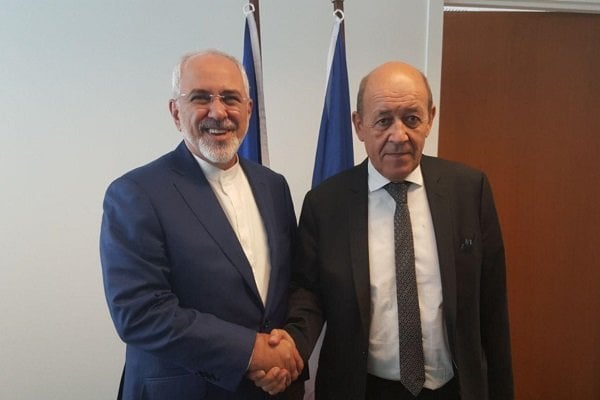 The foreign ministers of Iran and France have, in a phone conversation, exchanged views on a host of issues, a few days after the European diplomat’s call for talks on Tehran’s missile program and regional policies.

During the Saturday phone talk, Mohammad Javad Zarif of Iran and his French opposite number Jean-Yves Le Drian discussed the latest status of bilateral relations, the Iran nuclear deal and regional developments.

The phone conversation came a few days after Le Drian told a gathering of EU foreign ministers in Vienna that Iran must respect the fundamentals of the 2015 nuclear deal and should be prepared to negotiate on its future nuclear plans, ballistic missile arsenal and alleged meddling in conflicts across the Middle East.

Iran “cannot avoid discussions, negotiations on three other major subjects that worry us — the future of Iran’s nuclear commitments after 2025, the ballistic question and the fact that there is a sort of ballistic proliferation on the part of Iran… and the role Iran plays to stabilize the whole region,” he said.

In reaction, Iran’s Foreign Ministry Spokesman Bahram Qassemi rejected the call for talks on Tehran’s missile program and regional policies, saying the West has left no trust for Iran to sit for talks on non-nuclear issues.

In a statement on Friday, Qassemi said Le Drian’s comments were “undue concerns” founded on a misunderstanding or lack of knowledge about Iran.

Qassemi said Iran had always proved that it was not afraid of talks and that it strongly believed in dialogue.

The nuclear talks revealed Iran’s good faith and commitment to the principle of negotiation, and could in turn serve as a yardstick against which to measure the West’s commitment to its pledges, he noted.

However, he added, the West failed to live up to its commitments after US President Donald Trump unilaterally withdrew the US from the Iran nuclear deal – the Joint Comprehensive Plan of Action (JCPOA) – while other parties stood idle and kept mum.

“Under current circumstances … there is no reason, need, reliability or trust for holding fresh talks on any topic, let alone non-negotiable issues,” he said.